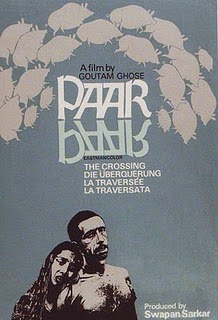 And the Cinema Workshop will be held on 2nd February from 2 to 5 pm at Hotel Shangri-La, Lazimpat. The workshop which intends to highlight the importance of cinema as an art form is expected to draw film students, journalists, film critics, professor and alumni of FTII, Pune.

Good news is that the event is free and open to all. Entry is on a first come, first served basis. So hurry up! Collect free movie passes from the office of Indian Cultural Centre, Bal Mandir, Naxal (January 27, 28 and 29). Tel: 4412715

Nepali cinephiles love Bollywood if not they are addicted to it. And Film fiesta is definitely a great opportunity to get in touch with the people behind the movies. Gautam Ghose, the man behind all those three movies and one of the most acclaimed film directors of modern India will also be present during the screenings. Here’s a short synopsis of all the three movies. 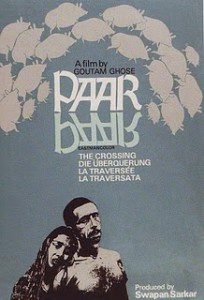 Synopsis: Paar (“The Crossing “) is a 1984 Hindi movie directed by Goutam Ghose. The film stars Shabana Azmi, Naseeruddin Shah and Om Puri. Naseeruddin Shah won a Volpi Cup for his role as Naurangia. The film is based on the issue of exploitation in rural Bihar. A landlord (Utpal Dutt)’s men wreck a village and kill the benevolent schoolmaster (Anil Chatterjee) who is in progressive force. The laborer Naurangia (Naseeruddin Shah) breaks with a tradition to passive resistance and retaliates by killing the landlord’s brother. Naurangia and his wife Rama (Shabana Azmi) become fugitives from justice. After many efforts to find sustenance elsewhere, the two decide to return home. To earn the fare, they agree to drive the herd of pigs through the river, causing the pregnant Rama to believe she has lost her baby. But they have to swim across a wide, swiftly flowing river, in which they nearly drown before reaching safety. 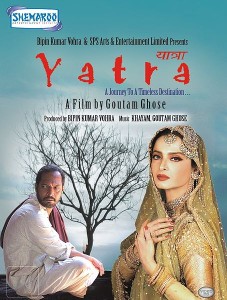 Synopsis:Yatra (Journey) stars Rekha, Nana Patekar and Deepti Naval. Dasrath Joglekar (Nana Patekar), a celebrated writer, travels to Delhi to receive the prestigious Literary Award. During the journey he meets a young film maker (Nakul Vaid), an ardent fan of Dasrath’s writing and the encounter brings back memories from the past. Both of them travel back in time, remembering characters from Dasrath’s celebrated novel Janaza, reconstructing the true story of the novel’s protagonist – Lajvanti (Rekha) from their own perspective. Fact and fiction merge together to create a new journey. Memories from the past and passion bring him to Mehendi galli where people flock to enjoy mujra dances. The entire area has changed. Lajvanti alias Lajobai has become Miss Lisa, presenting popular film songs numbers to entertain a new clientele. Dasarath’s sudden appearance is a great surprise for Lajvanti. The character of his novel Janaza comes alive at an unexpected juncture. 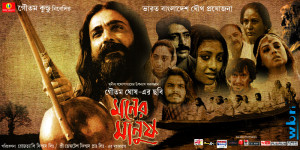 Synopsis: Moner Manush is a Bengali feature film based on the life and philosophy of Fakir Lalan Shah, a noted spiritual leader, poet and folk singer of Bengal in the 19th century. Directed by Goutam Ghose, the film has Prosenjit as the lead actor portraying the character of Lalan Fakir.Paoli Dam plays the character of Komli, the key female disciple of Lalan.
Rabindranath Tagore’s elder brother Jyotirindranath Tagore, a Western educated bright young man from the 19th century Bengal met the octogenarian Lalan Fakir and drew a portrait of the poet saint in the former houseboat afloat on the river Padma. Jyotirindranath, an urban intellectual exchange views with the man of native wisdom. Their exchange of ideas forms the cinematic narrative of this film. The narrative is a saga of the life and time of Lalan Fakir and his liberal sect who lived a life of high order in an otherwise superstitious 19th century Indian society.

Are you attending this film fiesta? Let us know in the comments below.

Images and Synopsis via Wikipedia