Just back from watching Transformers – Dark of the Moon and am stuck on this headline of Delhi belly banned in Nepal. The government in Nepal has banned the screening of Aamir Khan’s latest movie “Delhi Belly” referring to use of explicit language dialogues in the movie. According to a Film Censor Board member, the movie was issued an adult certification on condition that more than five obscene dialogues would be removed. Gopirkishna multiplex, distributor of the movie, neglecting the censor board suggestions screened the movie which was then complained to the authorities by Nepal’s Film Censor Board. 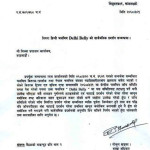 Tuesday Update: Nepal Government has lifted the ban on Hindi Movie “Delhi Belly” after the movie distributer for Nepal agreed to remove ‘obscene words’ from the film. In a press statement issued by Information and Communications Ministry, an agreement to remove the ‘obscene words’ was reached at a meeting between the distributer and Nepal Film Board on Tuesday. (Enlarge the Image on your left to see the press statement issued for the case.)

Now, here is what sounds funny for me – wouldn’t the movie have been suitable for adults in Nepal even after having certified as an Adults one? Or is it simply because monitoring ages of movie goers and limiting ages is a tough task for Film board of Nepal? I am sure they should have some set of rules on how they operate! (If you happen to know some, assist our readers by adding in comments below)

Aamir Khan responded particularly to this ban incident of his movie in Nepal and also gave permission for the distributor in Nepal to edit the dialogues and carry on screening the movie. Speaking to some media Aamir Said

“I am unaware of how the Nepal Censor Board functions. I don’t know their terms of certification. If they have banned the movie, then it’s their decision.” He further added “I hope the board realises that there are adults in their country.”

The movie released smoothly in India with an ‘A’ certificate (Adult certificate, another being ‘U’ certificate”) from the Censor Board. The movie is also facing screening problems in other countries such as Pakistan.

Another issue, which particularly added to this cause and also remains as better justification of distributor’s screening the movie without removing the dialogues, is lack of technical facilities in Nepal. Nakim Uddin, owner QFX Cinemas (powered digitally) was quoted saying ‘While it is easy to effect the cuts in the print version, it takes time to incorporate them in the digital version since Nepal doesn’t have the technical facilities and they have to be sent back to India.’ Three multiplexes which were running the print version – Gopikrishna, Guna Cinema and Big Cinemas – have got the revised prints with the cuts suggested by the censors and were back to screening the film. Others using the digital technology, however, would have to wait for the movie to be edited back in Mumbai and again sent them digitally for download.

But this is not the first time Hindi movie was banned in Nepal. Two years ago, “Chandni Chowk to China” movie starring Akshay Kumar was banned in name of nationality and following a public urge that the movie has misleading information on Gautam Buddha’s birth place. Some years before that, ‘Ram Gopal Verma ki Aag’, came under censors’ fire, especially for a sizzling dance by Bollywood star Urmila Matondkar, that was labelled vulgar. And another one that I can remember is banning Hrithik Roshan Movies following a public outrage on his comments for Nepal (for which he publicly apologized).

Hindi movies in comparison to other movies (even its own industry, Kollywood) have a better market in Nepal and so it’s time that things as such should be taken seriously. As Bollywood market keeps rising, it’s essential the Film board comes up with definite set of rules to address the screening issues properly.

Btw if you are wondering about what I have to say about Transformers – Dark of the Moon; I would strongly recommend watching this two-and-a-half-hour-long movie BUT to fully enjoy it please make sure it’s the 3D version for which Michael Bay has yet again proved this is the future of movies.

Oh and I have plans to watch Delhi Belly as well! This will hopefully be my second Bollywood movie that I will be watching in empty theatres of London, first being Mumbai diaries from the same Aamir Khan!