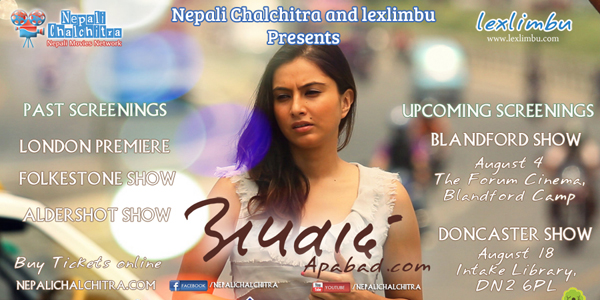 Share your thoughts about the Movie in the comments below and you could be among five lucky winners to be selected for the Movie Premier in Harrow, London.

One of the most awaited Nepali movies of the year – Apabad has been released all over cinemas in Nepal today.

The movie was premiered twice in Nepal before as charity shows and was successful in garnering brilliant responses. With all those positive reviews of the movie abuzz, it’s making all the cinephiles talk and patiently wait for the movie.

While the wait may be over for Nepal, Nepali diaspora in the UK will still need to wait for almost a week. Apabad is being premiered in London on 23rd of June.

The movie, however, has been screened already in other Nepali diasporas of the world including the US, Australia and Denmark. In Nepal, the movie was set to release quite early but was postponed due to the then political circumstances.

Following closely on Nepal’s release today is the very first screening of the film in London’s Safari Cinema (Harrow) on the 23rd June from 5 pm – 7 pm.

The film comes with English subtitles in hope that this transitional phase of our cinema will help attract the interest of non-Nepali viewers.

In addition to that, the second screening will take place on the 15th July from 5 pm – 7 pm in Folkestone at the K College and 20th July from 6 pm – 8 pm in Aldershot at the Princes Hall. Watch the Trailer for APABAD in the UK below.

Apabad is a contemporary story of thousands of youth of middle-class families. It is an instance of the belligerence of two different schools of thoughts – one being the conventional thought which plays by the rules of social dogmas and another more sophisticated and raw in nature, guided by freewill.

With growing number of young individuals making their entry into Nepali Cinema, the audience can sigh with relief and take comfort in knowing that our cinema has officially entered its transitional phase.

This is a move away from remakes of eighties Bollywood and a new step into the unknown. Joining the New Nepali Cinema is director Subash Koirala who presents his latest feature film ‘APABAD’, the title translates to ‘to be an exception’ in Nepali.

The 1 hour 50-minute long film also stars two young actors who have managed to create a name for themselves in a short amount of time, Raj Ballav Koirala and Nisha Adhikari.

Tickets for all three screenings of the UK can be bought online at NepaliChalchitra.com or by contacting the sales team. The screenings and distribution are being managed by Nepali Chalchitra and lexlimbu for the UK.

Watch the Promo Video made for Apabad in the UK. The video was filmed at Gurkha Cup in Aldershot, UK.

Update (July 24): After all three successful rescheduled UK Screenings Apabad is being Screened in more cities of the UK.

Here’s a recent promotional banner for the upcoming Apabad shows. 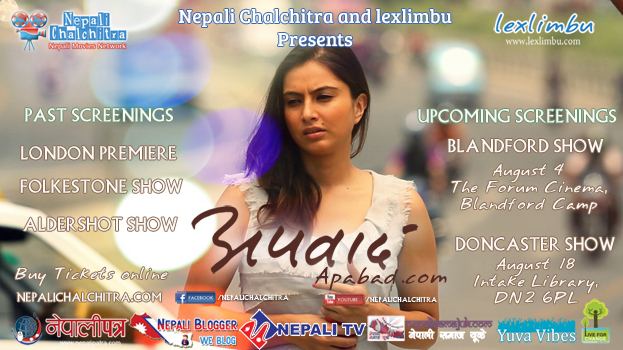 Have you watched the movie already? What are your thoughts on the Movie?

Share your thoughts about the Movie in the comments below and you could be among five lucky winners to be selected for the Movie Premiere in Harrow, London.

(Enter your valid email address in the comments form so that we can contact you and send you the UK premiere tickets.)