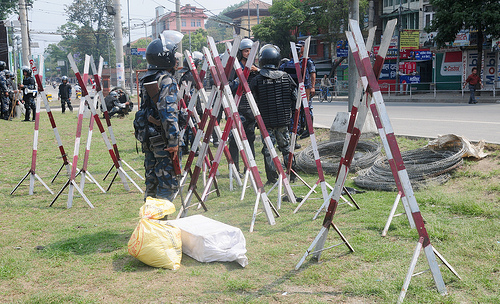 Maoists are celebrating May 1. This the live gallery of the event. It includes live photos from the event. Go to the Gallery below and Visit frequently for the updated photos. Police estimated around 125,000 participated in the rally. Maoist reportedly claimed 600,000 participated in the rallies. According to SP Ramesh Kharel, chief of Kathmandu police, the rally has been smooth and well-managed so far. No incident reported. Here’s the live Gallery of Events.

For Live blog updates on latest happenings of the Maoist’s General Strike, go to Maoists Agitation in Nepal Live.

Neupane urges all students to join the agitation. “We will win, we will fight hungry but will not return without victory,” he said.

*
Lekhnath Neupane, the president of All Nepal Independent Students’ Union (Revolutionary), is addressing the mass meeting.

*
At Tundikhel, Salik Ram Jammakattel, the president of Maoist-affiliated trade union federation is addressing the mass.

*
According to SP Ramesh Kharel, chief of Kathmandu police, the rally has been smooth and well-managed so far. No incident reported.

*
After Sapkota’s welcome speech, time for a song at the May Day mass meeting.

*
Maoists also organized a rally in Dektel of Khotang district, according to Saindra Rai. Maoists also collected donation in the district headquarters.

*
The rally at Narayanhiti Palace Museum is moving slowly, most probably as Tudikhel and surrounding area is jampacked and other rallies are mixing with it, according to Kiran Chapagain.
*
Maoist cadres in Butwal are preparing for May Day rally. According to Sher Bahadur KC, they will begin at four points and converge for a mass meeting at Butwal bus park to be addressed by politburo member Devendra Paudel. Meanwhile, security has been beefed up with 1,500 security personnel on duty.

*
The Maoist’s May Day mass meeting to begin soon. Most of the rallies are near the venue. Maoist chairman Pushpa Kamal Dahal and other senior leaders are scheduled to address the mass meeting.

*
Prime Minister Madhav Kumar Nepal will address the nation at 6 pm NST, according to News24.

*
The rally that began in Balaju and being led by Hisila Yami is the ‘biggest one’ so far that is about to reach the Tundikhel for the mass meeting.
*
Kiran Chapagain noted that he has not listened any pro-laborer slogan in nearly an hour. He also noted that participants allowed an ambulance to go through them.

*
The Prithi Highway is deserted, according to Samundra Paudel. The main route to connect Kathmandu used to see thousands vehicles but on Saturday, only a few carrying Maoists cadres on plying and markets on highway are closed.

*
The participants of the rallies are walking in two lines – YCL cadres ensuring that they want in formation. Kiran Chapagain noted that the people who came from outside Kathmandu have less enthusiasm in chanting slogans although all of them are carrying some slogans printed on A4 paper on their chests.

*
Krishna Bahadur Mahara is leading the rally that started at Koteshwor, where all Maoist cadres/supporters living in Bhaktapur have joined, according to Bimal Gautam.

*
The meeting of the taskforce is being facilitated by Federation of Nepalese Chamber of Commerce and Industry (FNCCI) and FNCCI chairman Kush Kumar Joshi is attending the discussion as an observer. He hoped that the parties could reach an agreement this afternoon and that Maoists would withdraw the strike.

*
The meeting of the taskforce of three political parties broke up. They will meet again later. They are trying to reach an agreement to put up before the top leaders’ meeting for national consensus.
Narayanhiti Palace Museum and Jamal area. They are chanting slogans against the government and PM Madhav Kumar Nepal.

For Live blog updates on latest happenings of the Maoist’s General Strike, go to Maoists Agitation in Nepal Live.