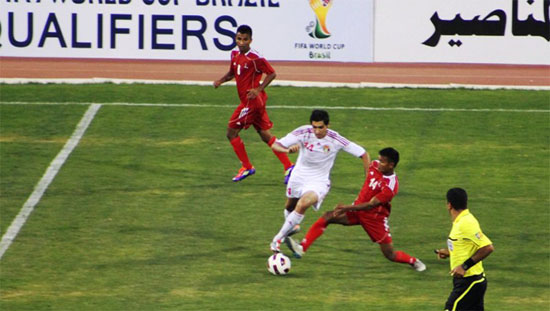 However excited we may have been with our Nepali team performance in first round of world cup qualifiers, this has laid us immensely upset. Nepal didn’t just loose the Jordan match played in Amman today; it in fact accounted for the worst loss in history of World Cup matches.

Nepal, in the first leg of the second round world cup qualifiers match with Jordan at the Amman International Stadium was defeated by huge difference of nine goals. The difference 9-0 becomes one of the highest margin defeats (fourth highest) for Nepal in international tournaments.

Indeed the match proved Jordan to be too mighty for Nepal. Lack of preparation and training, I think, was the biggest problem behind the loss of Nepali team. May that be with regard to the ongoing Martyrs Memorial League or some kind of limitations, but it did have a strong effect on the team’s performance. Jordan, having played some friendly matches was fully prepared for the match while Nepal didn’t even had enough time preparing and training for the match, let alone playing friendly matches.

I may be wrong here but Nepal’s win in first match was taken for granted and with this match everyone was expecting that ‘magical win’. Nepali team shouldn’t take any long to understand the reasons behind this humiliating score!

Jordan undoubtedly is a stronger team than Nepal and a convincing and competitive loss wouldn’t have been much of surprise but results with such a big difference clearly shows Nepali team has yet a long way to go! Should we be expecting 10-0 Vs Jordan in second leg here in Kathmandu?