Chinese Prime Minister Wen Jiabao has made an Official Visit to Nepal. His trip lasted for four-and-a-half hours and during his stay, he signed eight instruments under bilateral cooperation following the talks held at the PM´s office in Singha Durbar. Wen also attended the official luncheon hosted by PM Bhattarai in Singha Durbar and visited President Dr Ram Baran Yadav at his residence in Maharajgunj before he left Kathmandu for Qatar. 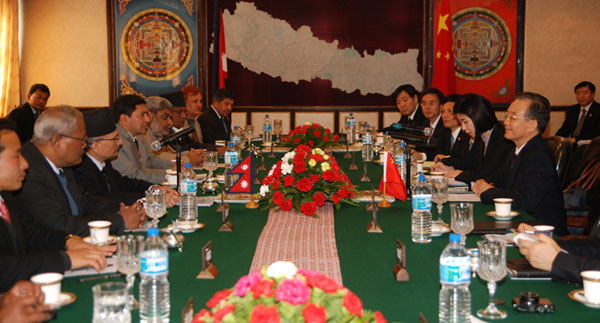 With almost an hour delayed (to what was reported as arrival time), Wen landed in a special aircraft at 11:50 am at TIA. He was welcomed by Prime Minister Baburam Bhattarai, Speaker Subash Nembang and other high government officials at the airport.

What did Nepal receive from Wen Jiabao’s Visit to Nepal?

Here’s the gallery of Images of Wen Jiabao Visit to Nepal.

This is the first visit from a Chinese premier in last ten years. The then premier Zhu Rongji had visited Nepal in May 2001.

But why was this visit kept hush-hush? Let us know your views in the comments below!