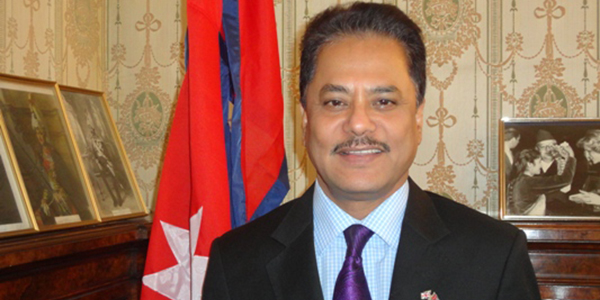 News is that Nepal’s ambassador to the UK – Suresh Chandra Chalise has been instructed to get back to work ASAP by the foreign ministry of Nepal. Chalise has been celebrating new year/Christmas holidays in Switzerland since few days ahead of Kumar Lama Arrest by the UK police. Generally traditions are that the ambassador should return to work within 24 hours in cases that involves problem between his two associated countries.

Former Nepal Army colonel – Kumar Lama’s arrest by the UK metropolitan police was widely covered by the international media. The arrest urged Nepal government to protest the incident terming it as “illegal” and “attack on the sovereignty”. While the government has taken it very seriously and almost all political parties in Nepal have released statements condemning the act, one of the important authorities for the incident – Embassy of Nepal in UK (esp. its key person – Ambassador Suresh Chandra Chalise) has seemingly turned his deaf ear towards the incident. Three days passed since the incident and the ambassador is still not concerned to fly back to UK (which takes slightly more than 1 hour time).

Speaking to an online newspaper, officials from Ministry of foreign affairs in Nepal said that “It’s not just a diplomatic blunder; it’s a severe disloyalty of the Ambassador towards the nation”. The government has submitted its protest note to the ambassador demanding Col Lama’s immediate release but officials said that absence of Ambassador has made the government’s lobbying process for his release considerably weaker. “An ambassador could have directly approached the foreign minister in the UK to discuss the issue straight forward but Ambassador’s reluctance to the issue has made the case feeble.” officials added.

BBC reported that two diplomats from the Nepalese embassy were at Westminster Magistrates for the short hearing on Kumar Lama’s case. In absence of Suresh Chandra Chalise, Deputy Chief of Mission Tej Bahdaur chhetri and Colonel Bishwanath Ghimire are handling the case and were present in the hearing.

Some sources however say that Suresh Chandra Chalise’s leave was approved for ten days by the ministry and that Chalise had been in constant contact with the embassy officials. As per my view, I don’t think Suresh Chandra Chalise presence would have speeded the process or made any difference to the case. The arrest has been on basis of the law and we have already seen the protest note not making any difference to British ambassador to Kathmandu, John Tucknott; who told Nepal government that it was the UK’s obligation to act. Nevertheless if Nepal government commits to investigate itself in the case, diplomatic discussions could work out the release process of the colonel.

UK police has claimed “universal jurisdiction” law to prosecute Kumar Lama and has charged him with two counts of torture. He is accused of “intentionally inflicting severe pain or suffering” on two men, Janak Bahadur Raut and Karam Hussain, while he was “a public official or person acting in an official capacity and in the performance or purported performance of official duties”. He was presented infront of Westminster Magistrates court where he spoke once to confirm his identity at the hearing. He has been ordered to remain in custody until 24 January when he is scheduled to face an Old Bailey hearing in London.

Personally, I applaud the move taken by the UK in arresting Kumar Lama. Well nothing personal but at least his arrest sends a warning message to Nepal government to implement Rule of Law and respect Human Rights in the country. This is a result of government’s failure to punish those involved in war crimes and thus failing to implement its signed international treaties. No wonder – the ones that are condemning this act are only political parties in Nepal. Several human rights activists and organisations have supported this act and have rather asked government of Nepal to improve its international image by expressing a commitment to investigate the case.