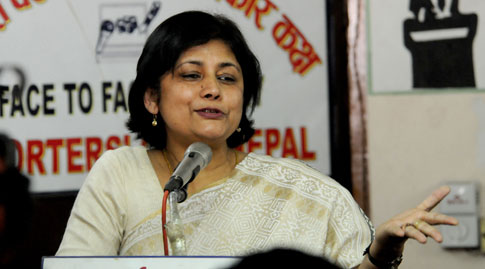 Despite the coverage of Nepali Minister Sacked by International Media intensively, one had to flick to several other websites in order to find actual set of reasons. Most of the websites that covered this only quoted the news story citing a single reason. Sacking of Sarita Giri – Minister for labour and transportation, however, was based on number of factors and wasn’t just limited to corruption or license issue.

Prime Minister Baburam Bhattarai took such sacking decision for first of its kind in recent years of Nepali politics. Bhttarai Sacked Sarita Giri – Minister for labour and transportation on grounds of obstructing the reform process initiated by the government to what his (Bhattarai’s) personal secretary termed as “against the spirit of the prime minister’s directive”.

Unlike other media, an explanatory post at My Republica looked to address a set of reasons why Nepali Minister was sacked;

3. Baburam Bhattarai had directed the ministry not to issue any license to new manpower companies as there were already 900 companies. But Giri directed the department to register five new companies.

4. Giri did not cooperate with ministry officials to implement the prime minister’s programs. Bhattarai had assigned Joint Secretary Purna Chandra Bhattarai to implement the reform programs. But Giri recalled the joint secretary from the department to the ministry, accusing him of not working as per her instructions.

It was reported that Baburam Bhattarai urged Giri to resign stating that he was under tremendous pressure of accuses on the ministry. But then Giri denied resigning for the decision she made of transferring a bureaucrat. PM’s decision of sacking was conveyed to her in the morning by his personal secretary Ganga Shrestha.

Giri, leader of Nepal Sadvawana Party (Anandidevi) has been replaced by Chairman of Rastriya Janamukti Party, Mathabir Singh Thapa in the cabinet.

There are many other Ministers in Bhattarai’s portfolio that need to be taken action against crimes and corruption. Last month another minister for Information and Communications Jay Prakash (JP) Gupta was jailed under same case of corruption.

Well done Mr Bhattarai! Everyone will appreciate your brave decision!!

News (*set of reasons as stated above) and Image taken from Republica.