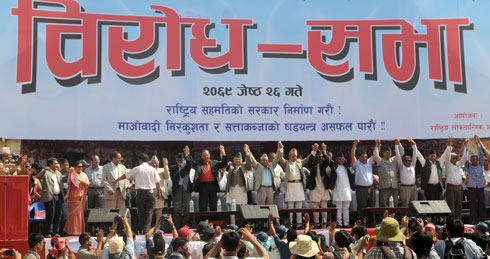 While the Constituent Assembly (CA) got dissolved earlier this month as it couldn’t fulfill its duties and ran out of renewal options; discussions are now rife for who is who is it to blame for! And amidst all those, all allegations are put onto the leading party Maoists for taking wrong decisions of dissolving CA and announcing date for fresh CA elections by the joint 22 opposition parties.

Here’s a short video of 22 opposition parties Protest in Kathmandu.

All of the 22 agitating groups had one clear voice – PM Baburam Bhattarai should step down and pave the way for formation of consensus government.

And just a day after the protest organised by 22 opposition parties; another protest is taking place today at Khullamanch in Kathmandu by the pro-royalist Rastriya Prajatantra Party Nepal (RPP-N).

What do you say about the protests?