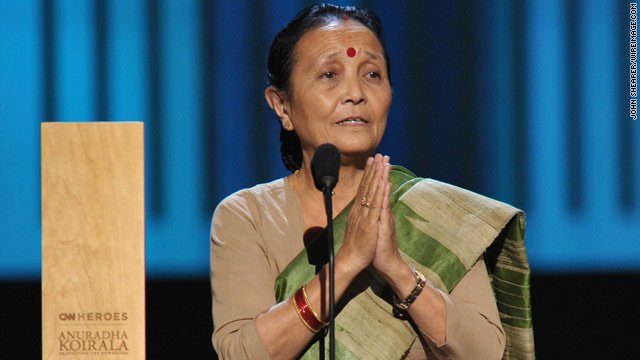 The founder of Maiti Nepal was overwhelmed by the support she got for her work from all over the world. “Human trafficking is a crime, a heinous crime, a shame to humanity” Anuradha expressed after being introduced as one of the Top 10 CNN heroes of the year on the CNN Thanks giving night programme. She Continued “I ask everyone to join me to create a society free of trafficking. We need to do this for all our daughters.”

Anuradha Koirala was chosen for the title through an online voting system at CNN website that ran for 8 weeks, the result of which was announced at the conclusion of the fourth-annual “CNN Heroes: An All-Star Tribute”, airing from the Shrine Auditorium in Los Angeles, California. She will be awarded with $100,000 to continue her work in Maiti Nepal in addition to $25,000 she has received for being a top ten CNN hero. See the Video from CNN below!

Apart from patrolling the Nepal India border and raiding Indian brothels, hopefully Anuradha Koirala will now focus on factors such as poverty and illiteracy that she believes are the main hindrances of Girls Trafficking problem in our Country.

Anuradha Koirala is fighting to prevent the trafficking and sexual exploitation of Nepal’s women and girls. Since 1993, she and her group, Maiti Nepal, have helped rescue and rehabilitate more than 12,000 victims.

So this is a great achievement for Nepal and in fact we should be really proud to have such women in our country. And least to mention our efforts in promoting the campaign has been rewarded by honouring this lady as the title. Almost all high profile media promoted the campaign to vote her and made it possible for the award. We at Nepali Blogger also took a step to publish a blog post and must say that it was effective. Thanks to everyone who shared the post on social media and went through the link to actually vote her. Our blog post asking to vote her was the most shared post on facebook till now (More than 500 times shared). And the post was the most viewed post on Nepali blogger till now. (63,599 Impressions, 0.57% Feedback)

And finally want to Congratulate Ms Anuradha Koirala for being the CNN hero of the year and making all Nepalis proud.