A warm welcome in Nepal amidst controversies of Sepp Blatter‘s re-election and kickbacks scandal here in Europe should have made him feel a lot better. Blatter, President of FIFA – world football’s governing body, visited Nepal on Thursday to attend the opening ceremony of the AFC Challenge Cup taking place in Kathmandu. 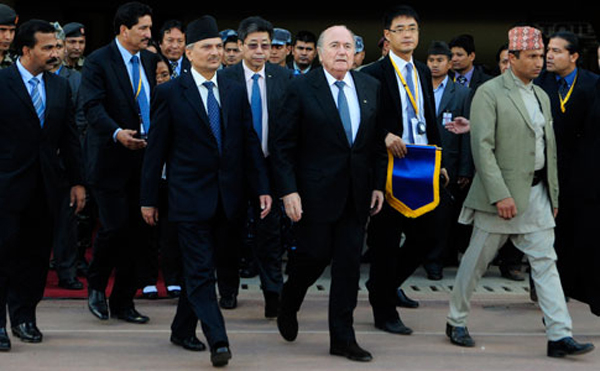 It was a special day for Nepal as the AFC challenge cup is the biggest ever football event held in Nepal. This was made more special by the presence of FIFA President Sepp Blatter.

The sad thing however was Nepal being defeated 2-0 by Palestine in the opening match but that’s another story.

Update: Despite watching the sad loss of Nepal (0-2) to Palestine yesterday, Sepp Blatter still believes Nepal has a good future in football! Blatter left Nepal after finishing his two days visit in Nepal which included the opening of AFC challenge Cup yesterday and inauguration of the Project Goal Nepal at ANFA complex at Satdobato today. Blatter has left for India today where he will meet India Prime Minister Man Mohan Singh.

Thank you President Sepp Blatter for making the event special for Nepal!