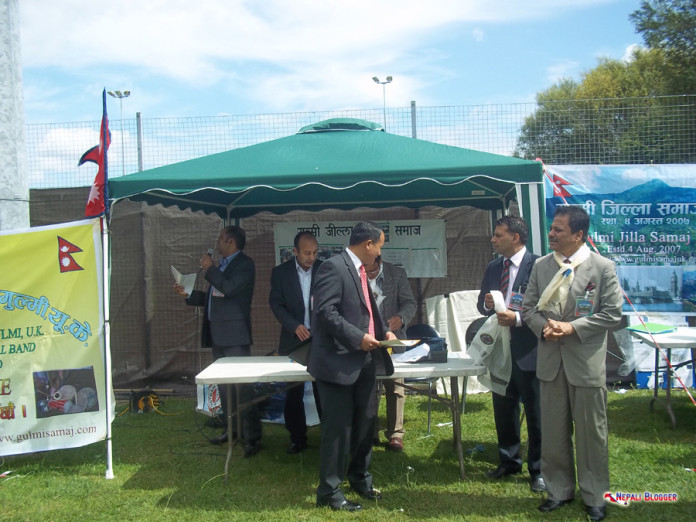 Nepali communities in the UK are mushrooming along with growing number of students visiting this country and ex-service people (esp. army sector, Gurkhas) settling here to make this their home town. Even a small borough of Hounslow, London where I am currently based has dozen of Nepali communities. And if registered figures are something to go by, there are more than 300 community organisations in the UK. Gulmi Samaj UK, as one sets an exemplary region based community. The community’s growth, presence and works became so appealing to me that I had to visit this year’s get together program to explore more.

With an hour long national rail journey from Waterloo, I managed to reach the venue for this year’s annual get together programme of Gulmi Samaj UK. Although expected, I was surprised to see the amazing attendance in the event. The event attended by almost half a thousand Nepalis (esp. Gulmelis) was to mark 5th anniversary of the community and to continue with its get-together program held every year around same time.

The program organised at Oak farm community school in Farnborough was chaired by Suresh Chandra Chalise, ambassador of Nepal for UK and had several attractions including Naumati Baja, a rare musical; volleyball competition and hour long cultural programme. Executive members from the community spoke on how they were making difference by giving back to the community and their recent projects such as the Ambulance donation programs in Gulmi district of Nepal. They also welcomed new members in the community and highlighted figures of their growing members and contributions.

I managed to take some images and videos of the event. Here’s the gallery!

Nepali communities recently have become almost vital for people living abroad. London, which used to be such a safe and secure place, has recently turned out to be chaotic. News such as “Increase of attacks on Nepalis in UK” has left most of us depressed to keep on taking UK in its previous image of being secure. Apart from such situations, people are always vulnerable to other naturally arising problems which indeed need help and support from the community.

Unlike other communities based on caste and colour (Gurung Samaj, Magar Samaj, Tamu Samaj etc etc), Gulmi Jilla Samaj UK is an exemplary community initiative based on region. Although community for every district may not be possible, I wish communities as such continue to grow and form an extensive network for giving back to Nepal, where they come from originally. I wonder how easily we could develop Nepal if we had bunch of communities as this one! What do you say?