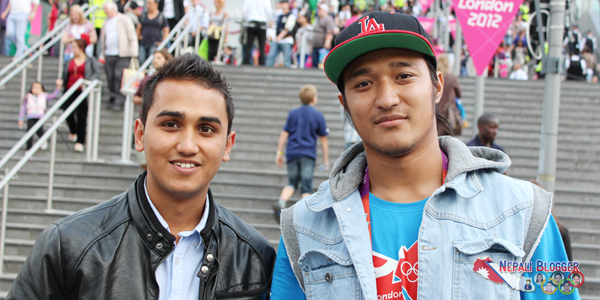 London 2012 Olympics is finally over and as Team Nepal 2012 prepares to leave for home today, I caught up with Prasiddha Jung Shah to share his experiences here in London.

Prasiddha is the most experienced player in the Team Nepal 2012 and he was also the flag bearer for Nepal in the opening ceremony of the Olympics.

In the busy streets of Stratford Olympics Village, Prasiddha Jung Shah speaks to Pradeep Singh of Nepali Blogger on his experiences and importantly on how Nepal could progress in future games.

I was simply being realistic. Although it may sound good to say that we are going to win medals this time, it’s least possible in practice. Let me tell you “why” – We don’t get training all year round. It’s just 6 months that we are scheduled to train and reducing all holidays from that, it is only five months in a year that we get to train ourselves. And to expect on top with that limited practice as of ours is impossible.

Tell us about your obstacles in your journey from being selected till participating in London 2012 games.

As for selection in swimming, it was more of controversial in deciding who should be representing Nepal at Olympics. It was all smooth afterwards I was selected. But then, unfortunately, I was injured while at training here in London and there were few preliminary problems in medications. But again that was all sorted out by my physiotherapist effortlessly. Apart from that, everything went well this time.

Why were the selections controversial? Is it because there were more experienced participants than you seeking to participate in the games?

Experience wasn’t the issue at all. How it works is, we need to be playing qualifying matches even for the wild card. When it took place in china, I was the winner with the best timing but again in the Federation Cup Swimming Championship in Hyderabad, India; Sailesh Rana was the winner. However, his timing was not good as mine compared to that of china. This aroused controversy slightly but finally, I made it to the games on basis of better timing.

What can Nepal do to improve in upcoming games in future?

As for swimming (my game), Nepal should provide proper competition pools complying with the regulations regarding temperature and lighting internationally. Another important part is of management of games within Nepal itself. A proper coaching from top strategically ensures better players. Well scheduled training programs are also what Nepal lacks at the moment. Appropriate planning should be done on what needs to be worked out on weekly basis during the player’s trainings.

And there are many associations in Nepal relating to our games which collide among themselves and a severe effect of this is seen on Players. Players are the one blamed at the end for their poor performance.

Finally, tell us about your overall experience. Will the experience gained here help you to do better in next games?

The overall experience was interesting. I succeeded in giving my best in the games and at least satisfied with that. The experience I gained from the games will definitely be useful. More than that we got to see how others practice for the games and we exchanged our ideas on better performance that will come in use for future games.

Prasidhha Jung Shah is one of the five participants participating in London 2012 Olympics from Nepal. He participated in Men’s 50m Freestyle setting a new personal record of 26.93 seconds.

Sadly, without any notable achievements, Team Nepal 2012 is returning home from London Olympics 2012. Hopefully, the experience our young team has gained will help them to do better in next games.