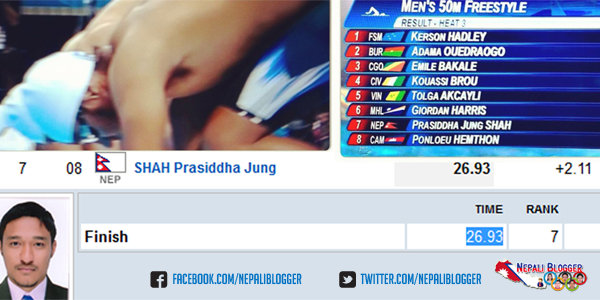 The point is not about winning but giving out the best one could. We cannot easily expect Team Nepal to win but what we can at least expect is the best out of them! Prasiddha Jung Shah competing at Men’s 50m Freestyle here in London today didn’t qualify for other rounds. He didn’t even set any national records but on top of all that, he gave best of what he could have given at the games. He did his best to overcome his previous personal record of 27.04 seconds set by him!

Prasiddha was also the flag bearer of Nepal during the opening ceremony of London 2012. He had earlier said “We are not in a position to win medals in Olympics. So I will try to better my personal record.” And that’s what he was essentially successful in!

Prasiddha Jung Shah had participated in Beijing Olympics earlier along with three consecutive FINA World Swimming Championships. He is one of the five participants participating in London 2012 Olympics from Nepal. Two players Sneh Rana and Shreya Dhital have already participated in the games and other two players Pramila Rijal and Tilak Ram Tharu are scheduled to play in next two days.