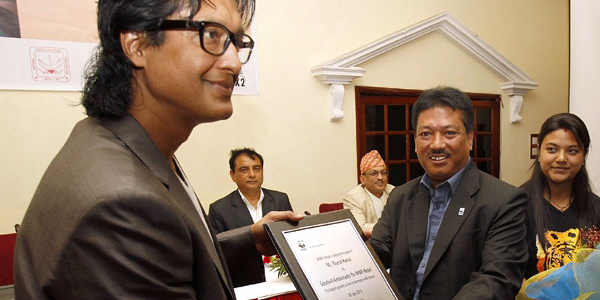 On the occasion of 3rd Global Tiger Day celebrated yesterday in Kathmandu, WWF Nepal has appointed superstar Rajesh Hamal as Goodwill Ambassador for the preservation of tigers. Nepal saw an increase of 21 tigers in last three years in the data reported by Department of National Parks and Wildlife Conservation (DoNPWC) in coordination with the National Trust for Nature Conservation. Previously former Miss Nepal Malina Joshi was the tiger conservation ambassador of WWF Nepal.

Superstar’s involvement in this environmental protection issue will be of a great aid to WWF Nepal and mainly to its aim of doubling the population of tigers in the country by 2022. Speaking at the programme organised at Hotel Himalaya yesterday, Rajesh Hamal pledged to initiate tiger preservation and strengthen anti-poaching activities.

He added “Tiger is the umbrella of various species that benefits us in multiple dimensions,” and that he is going to work with locally based communities and clubs to spread awareness and make conservation of this endangered animal more feasible.

Rajesh Hamal has been active supporting numerous campaigns and causes. And being the most popular film icon of the country, his attachment to issues as such helps garner significant interest from the public in those areas. All the best to the star of nation in this environmental campaign of tiger protection!