After a huge success of the movie Dasdhunga in Nepal, producers of the Nepali movie are looking to promote it in the Nepali communities of western world. The Manoj Pandit movie is coming to UK and will be shown in several Nepali places; most of them in London. The film show events are organized by KalaMandir UK and will cover Nepali community based places including Plumstead, Wembely, Reading, Farnborough, Peterborough and Scotland. The organisers have already come up with the dates of their first show which is set to happen at Plumstead on Saturday, , 6th of March. For more details see the banner released by the organizers below.

The show was previously scheduled for 19th of February which has now been shifted to 6th of March. 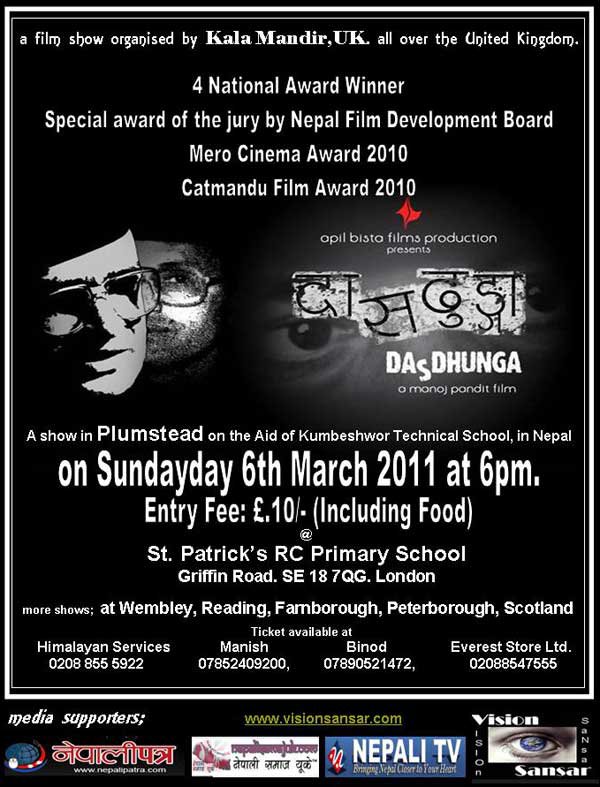 Dasdhunga was released in Nepal in early September last year. Premiered in Kumari Hall in Kathmandu, the movie was successful to gain the attention of great political leaders of the country. A movie based on the popular Dasdhunga event, it aimed to appeal for the reinvestigation of the case to find the truth. Dashdhunga event was a nation shocking event as the country lost two great leaders, i.e. Madan Bhandari (General Secretary of Communist Party of Nepal, United Marxist Leninist (CPN-UML)) and central committee member Jeeb Raj Ashrit. The death still remains as a mystery.

Dasdhunga is one of the critically acclaimed Nepali Movies. Manoj Pandit’s work in the movie has been praise worthy one. The movie won four National awards and was also awarded as the best Nepali Cinema award from Mero Cinema, online cinema portal of Nepal. Let’s see how UK Nepali Movie viewers take the movie.

Previously, Nepali movie Birata Ko Chino was successfully premiered in UK. The movie was shown in UK even before it was released in Nepali theatres. The movie couldn’t do a great business in Nepal though. (Watch the video in this post for UK viewer reactions for the movie) Another Nepali Movie Kohi Mero of Alok Nembang is also rumoured to have some shows in UK.

Nepali movies won’t make any great business in this community but still their increase in popularity along with such international premieres cannot be denied. Unless the movie is leaked and posted online on Youtube (as it happened to Bato Muni ko Phool), most Nepali won’t have access to latest Nepali flicks. As so, for Nepali movie aspirers, premier events like this appear as an opportunity to watch Nepali Movies. Anyway, I hope to see Nepali Movies in theatres of London making business some day. Best of luck to Dasdhunga!

Are you going to watch any shows in UK? Or have you already watched the movie? Your take on the movie will be highly appreciated and will also help our readers to know more on the movie. Please leave a comment below on what you have to say.