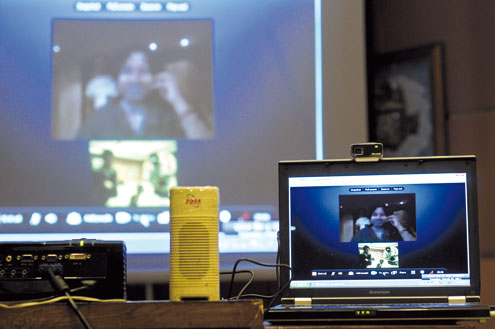 In a recent interview for a newspaper in Nepal, I remember Samden Sherpa, director of JPR Events saying that Nepal will see the flow of international artists often. I hardly believed it then. For sure, many thought it was just an over joy after looking at the Bryan Adams successful concert. But his words are now trustworthy with this one; Kailash Kher, the popular Bollywood singer is visiting Nepal to dance and sing along with kathmanduities.

And we got to hear this from the horse’s mouth itself! Kailash Kher skyping with Sunil Hamal of JPR Events said “Kathmandu is a juxtaposition of art, music and culture and I’m looking forward to performing for the Nepali audience.” Thanks to technology along with Kailash for those kind words.

So get ready to celebrate this New Year’s Eve with some sufi music. The Indian Sufi playback singer will be there at Soaltee Crowne Plaza on the Nepali New Year’s Eve, April 13. Here’s the video released from Kailash Kher confirming his visit to Nepal. He also promises his words for Nepal Tourism Year 2011 in the video. Watch it!

But this is not the first time Kailash Kher is visiting Nepal. Speaking at the event, he revealed that he has visited Nepal previously to perform at a private party at Hyatt regency. And this is less or more similar to the private function as Sherpa expresses, “It will be more of a private event,” adding it will be followed by an after-party including a fashion show.

Oh wait our popular rumour of Shahrukh Khan Visiting Nepal may also come true. We published the rumour here at Nepali blogger in link with an existing video of Shahrukh Khan announcing to visit Nepal. Well, we are not sure if he visited then, but he may be coming to Nepal this year in May as Sherpa adds “After the success of the Temptation Reloaded Tour in 2008, Khan and Chopra are embarking on another world tour in 2011 and Khan has agreed to come to Nepal although we are yet to sign a deal.” Keep Fingers crossed if you want to see him in Nepal!

In a similar context (of Kailash Kher and Nepal), there’s one video that went viral on youtube; a Nepali boy singing his popular song that he also sang during the skype conversation. The song “Saiyan” is sang at its best by this young boy from Nepal. We recently made Rebecca black a star (no Matter she got popular as we hated or we hated because she got popular); so why not invest some of our efforts to help this Nepali singer to rise? Help sharing the video below of a boy who sings hit number, “Saiyan” of Kailash Kher.

While Rebeca black with her amateur and poor voice got her video viral, there’s no reason why our talented boy’s voice won’t get viral if we share/promote his youtube presence effectively.

Going back to the concert, there’s still an exciting thing drawn in. The concert will be opened our own Nepali band Abhaya and the Steam Injuns. Excitedly she shares on Facebook saying “Nepali new year’s eve is going to be a blast. We are opening for Kailasa. (Kailash kher and band)! Yay”

And one sad factor as well! The event is damn expensive. I think the success of Bryan Adams concert fuelled organizers to experiment with the ticket prices. However criticized Adams expensive concert may be people made it a huge success after all. So, still higher than Bryan’s prices; Kailasha’s one will cost you 5k Nepali rupees. But unlike Bryans one, this is a five-six star hotel deal and you will also be able to enjoy the dinner (three-four course) including the show for the same amount.

So while you wait for him to see performing live in Kathmandu, listen to some popular tunes of the singer. The Song Allah ke Bande from movie Waisa Bhi Hota Hai Part II, made him a household name. Other Two songs Teri Deewani from the album of the same name by his band Kailasa and especially the song Ya Rabba from the movie Salaam-e-Ishq has become a record-seller.

Indeed Bryan Adams Concert proved Nepal ready to open its musical floor for other international acts. What do you think of these international artists visiting the country? Will they really help to make our Tourism Year 2011 Successful? Let us know in the comments below!