“Just flew over Everest into Katmandu, Nepal. We are the 1st western band to play here. With all the music in the world how is that possible?”

This tweet comes from Bryan Adams after an hour he has landed at TIA in Kathmandu. Amid a huge security, Bryan Adams was taken to the Soaltee Crowne Plaza hotel in Kathmandu from where he will soon be arriving at Dashrath Rangashala to perform for the first international concert in Nepal. We all Nepali’s are as proud of him as he is for Visiting Nepal. All I want to say on this big day “Namaste Bryan Adams, Welcome to Nepal!” 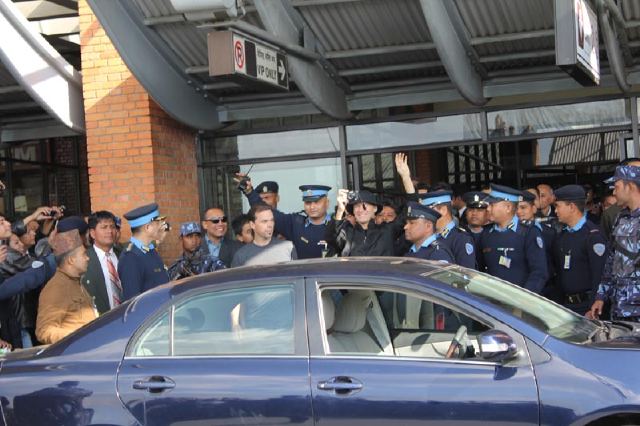 Here are some of his arrival photos that he retweets from twitter. (Thanks Twitter, it has been a great medium both for Byran Adams and fans like us to exchange our feelings.)

Being a passionate photographer, Bryan Adams takes photo as soon as he lands at TIA. He also tweetpics the photo (see below) 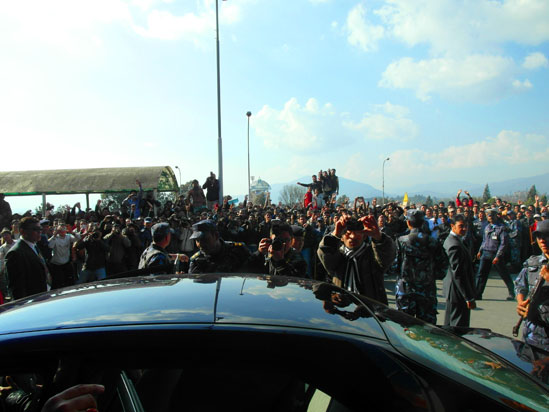 Bryan Adams Concert in Nepal – What our People say?

So how excited are you for the Bryan Adams performance. Here are some of our very crucial people for the concert speaking about Bryan Adams in Nepal for different media.

“I am having a very good feeling to front an international artist like Bryan Adams and I am hopeful to receive further more opportunities in the near future. It will help other deserving artists of Nepal to do the same if such network will spread increasingly”. Robin Tamang – Cellroti

‘I am very happy as I am receiving a chance to share the same platform and moreover, the excitement in me a much higher than doing national shows. After all, we are big fish of a small pond whereas Bryan Adams is a big fish of a big pond. You can also compare our excitement with that of our ministers sharing a dais with Barrack Obama.’ Dinesh DC – Cellroti

“I was a huge fan of Bryan Adams then. It’s an honor not just for my band but for the entire country that an international artist of his stature is coming to perform here.” 1974 AD – Republica

“So the fever of Bryan Adams Concert is hitting my head now. Super excited yet feverishly nervous to be the EMCEE for the concert.” Malvika subba – Facebook Page

And if those above lines don’t sound cheesy to you, here’s one;

“Bryan Adams will not only promote Visit Nepal 2011 and propel economic growth, but he’s also offered to draft our constitution!!” Nepali Keti – Twitter

Bryan Adams is one of the most popular celebrities to visit Nepal and the first western band to play in Nepal. Previously Nepal has been visited by popular names such as Richard Gere, Sting, Cher and Leonardo DiCaprio. Cher visited Tibetan refugees in Nepal; Sting walked in unheralded into a Kathmandu jazz bar and jammed with the local musicians; and former Spice Girl Geri Halliwell visted Nepal to promote maternal healthcare.

With visit of International celebrity like Bryan Adams we at Nepali Blogger hope that “the word for Nepal and Tourism Year of Nepal spreads all over the world.” What say?