Bryan Adams is flying to London from Nepal today for his performance here on 22nd of February for City Rocks, the first major rock concert ever to be held in the City of London. I am not attending this London’s concert and that’s not exciting for me in anyway. What’s exciting is the last 24 hours that Bryan Adams spent in the kingdom of Himalayas, Nepal.

Bryan Adams leaves Kathmandu nearly after 24 hours of his visit and a power-packed 120 minutes of live performance last night in Kathmandu, Nepal. For those in Kathmandu, it should have been an awesome night. Bryan Adams will always be remembered in Nepal for years to come for being the first westerner to play in Nepal. Even Bryan Adams himself is proud of that. Indeed a night to remember! 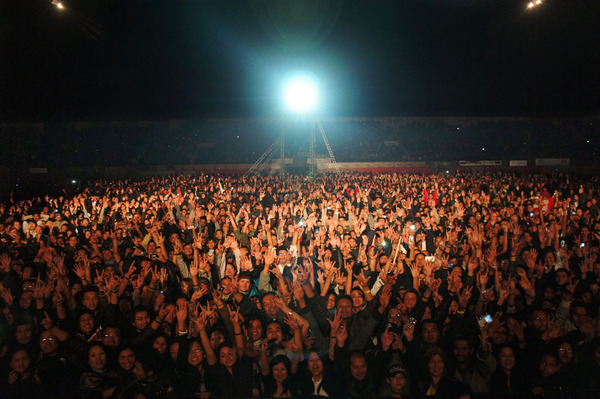 See the screenshot of his official website after the performance in Kathmandu. (I can’t imagine his homepage being better than this; Katmandu, Nepal Ka ka ka ka ka Katmandu!)

Bryan Adams started with Bob Segar’s Kathmandu, although a perfect choice, it was really unexpected when everyone was waiting to sing along with his tunes. A major highlight of the show and also a song that was enjoyed to the fullest by the audience was “summer of ’69”. Watch the video below of the live performance to see how people went crazy over the singer’s husky voice and urged him to sing it once again.

And then he continued with (Everything I Do) I Do It for You, one of my best B-man’s music from movie Robin Hood: Prince of Thieves. Bryan in his two hours of performance continued with his other hits including Straight From the Heart, I’m Ready, 18 till I Die, Cloud # 9, Back to You, and The Only Thing That Looks Good On Me Is You.

People from every walk of life attended the show. It was not just the youngsters and rock stars of Kathmandu, bankers and other professionals also attended the show. Along with Anil Shah, CEO of Megabank and Radhesh Pant, chief of Kumari Bank; there was one luckier banker who attended the show. Brinda Singh, an executive with the Bank of Kathmandu and surprisingly who happens to be the struggling singer turned banker, steals the Bryan Adam’s show as she was chosen among 20,000 cheering fans to croon ‘When you are gone’ along with the singer. This made the event more interesting on one hand and on other helped Brinda singh for overnight popularity. (She was there on all national dailies today and some channels of Nepal, watch the video below!). 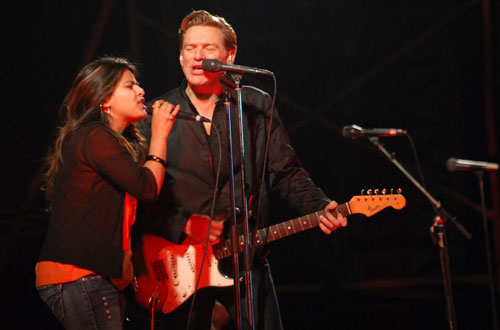 The concert will definitely grow up Bryan Adams fan base in Nepal and lot of Nepalis will remember his songs in days to come. The 20k crowd behaved at their best and it should have been the most organized concerts with such a huge crowd. “We became friends tonight,” Bryan Adams said adding he had never thought he’d be performing in Nepal while writing or composing the songs he sang Saturday night.

Bryan Adam’s tweet that came along with the photo taken by him (on the top) also suggests how amazing the concert was.

“Tonight from the stage…Katmandu, Nepal, you were amazing”

And as Times of India reports “Democracy Day in Nepal this year seems to have a new hero. And no, it’s not the country’s new Prime Minister Jhala Nath Khanal.”

Not everything was as cool as we saw it though. Bryan Adams concert should be hugely successful one and each of us deserves some credit for making to it so. But at the same time, if you got some time to listen to our very own Nepali issues, you will be bit of disappointed to have realized it. Earlier rumours of Nepali Bands (that consisted of 1974 AD, Namaste, Raju Lama (Mongolian Heart), Ishwore Gurung (Namaste), and Robin Tamang (Robin And The New Revolution) performing for free for the Bryan Adams concert left everyone questioning about their standards. That may not be true enough (I hope so) but after looking at views of some important personalities attending the event, I doubt if it worked all that well on the Nepali side.

Notably, Malvika Subba on her Facebook Page writes “Through mismanagement, politics, lack of dressing room for Nepali artists and chaos, the BA concert took place. I hosted but there was no excitement until Brian dài turned up.”

Asish Syangden of Radio Kantipur tweets “hamro nepali bands haru ko halat backstage at Bryan Adams Concert. On the floor” along with the below photo. 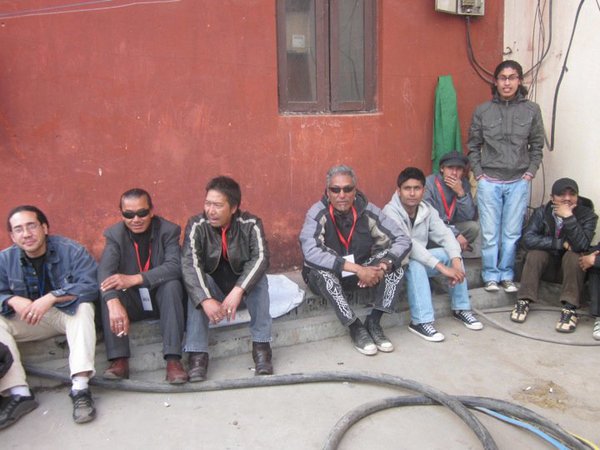 Samriddhi Rai on her Facebook writes “Sitting down and clapping while the 3 year kiddo sings our national anthem: Dinesh DC what’s wrong with you? You have become the most hated person in my facebook and I am sure you are also most hated by the 20,000 people who witnessed u too” (Watch out her column on FR!DAY weekly about Bryan Adams story)

Anyway let me not dive into pessimistic things. I am still proud that Bryan Adams Concert finally happened in Nepal.

Fears of security and even a possible stampede prevailed before the event in the city and the case was made livelier as the singer’s concert of Delhi got cancelled on grounds of security. If it were to go along with all those cynics, the event was seemingly impossible. Yet, Bryan Adams concert in Nepal being a hugely successful event proved that we were more into sceptics and to the positive aspect, we are capable of hosting events as such. As the show was also related to one of the important events of the country, i.e. Tourism year of Nepal 2011, the success should also be cheered by our tourism authorities as they believed the show would send out the message to the world that Nepal was a safe destination to most of them.

Fine Bryan Adams won’t help us for our Tourism Year publicity but Bryan’s popularity cannot be simply ignored. One of the Rock legends, he has thousands of fans and followers. A successful event as such has helped us to raise the bar of our entertainment industry and this will lure some other popular artists to opt for something similar in future. And as Bryan says hopefully ‘May this first become a way to many other bands to come and perform here,’

Being a social media fan my post won’t be complete if don’t talk about twitter here. Twitter, unsurprisingly became an effective social media tool for Bryan Adam’s concert. Like most of the popular celebrities, Bryan also made twitter one of the effective tools to communicate with the Nepali fans. His arrival tweets, experience tweets and tweets replying to some of the Nepali fans helped lot many out of the country (like me) and those unable to attend the concert to be connected with the concert. Some journalists attending the event (@wagle @rajneeshb) and other bloggers and tweeples covering the event even though they were not present at the event made the overall twitter experience really incredible! Hopefully this will also inspire a lot Nepalis to join the twitter culture. (BTW if you are joining twitter or are already there, please follow @nepaliblogger)

To be honest, I am not a Bryan Adams fan and I doubt even if just a good percentage of those 20k attendees of Bryan Adams’ concert were fan before his concert yesterday. (I know most of those attendants should have turned into fans of Bryan Adams after his performance yesterday) However thankful I may be for his big concert in Nepal, I am not going for his performance here in London. In a different note for Nepali’s living in London; if you happen to be Bryan Adams fan (from long ago or just because he was the first one to have performed in our country) you can catch him on 22nd of this month at City Rocks, the first major rock concert ever to be held in the City of London and dubbed as a landmark occasion in London’s social calendar.

Before leaving the venue in Nepal, Bryan Adams reportedly said that he will be coming Nepal again to visit different places of the country and this time people will hardly notice about his arrival. Thank you Bryan, Thank you so much for performing in Nepal; we love you, we Love Nepal!

Here’s one special video taken from Byran Adams itself from the stage. Nepal looks amazing!