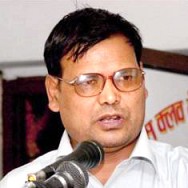 “We regret banning blogs which fostered internet censorship in the country. We believe people have rights to access true information and we hope our step of uplifting the ban on blogs and acquiring one of the popular blogs will provide a huge support from the government side” said Mr. Krishna Bahadur Mahara, minister for Information and Communications speaking at a press meet at Reporters’ Club today. Nepal government was hugely criticized in context of restricting blogs previously and oh what a surprising step the government has come up with!

Nepali Bloggers all over the world have welcomed this step of Nepal government and the news has been viral in the Nepali Blogosphere. All major news agencies including Fox News and some popular blogs like mashable have also covered this acquisition of blog by Nepal Government.

Dr. Suresh C. Chalise, Nepal’s Ambassador to the UK also welcomed this step of Nepal Government and made a visit to Nepali Blogger’s HQ located in city of London to discuss further plans in terms of operation.

However the deals are yet to be finalised and will be notified with a press release tomorrow at official website of Ministry of Information and Communications and here at Nepali blogger. Stay tuned! (*See Tags for more Info)

* please note this was just an April fool post.