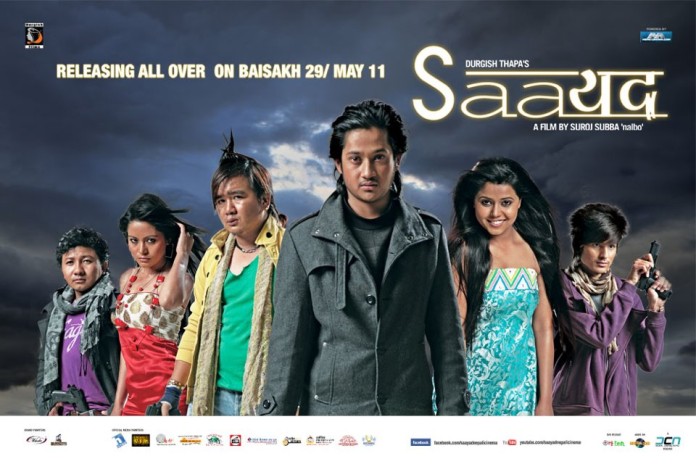 It may be your story. Well, it might not be but one thing assured is that it might be worth watching. Here comes another much-awaited Nepali Movie – Saayad in theatres. Good news is that the movie is already getting positive reviews from many viewers. On top of that, the movie is running successfully despite the bloody bandh in Nepal. And if preliminary reports of some popular movie blogs and websites are to be trusted, the movie is doing as good as Loot and Chapali height (– recent movies that uplifted the face of Nepali Movies Industry) in Nepal. 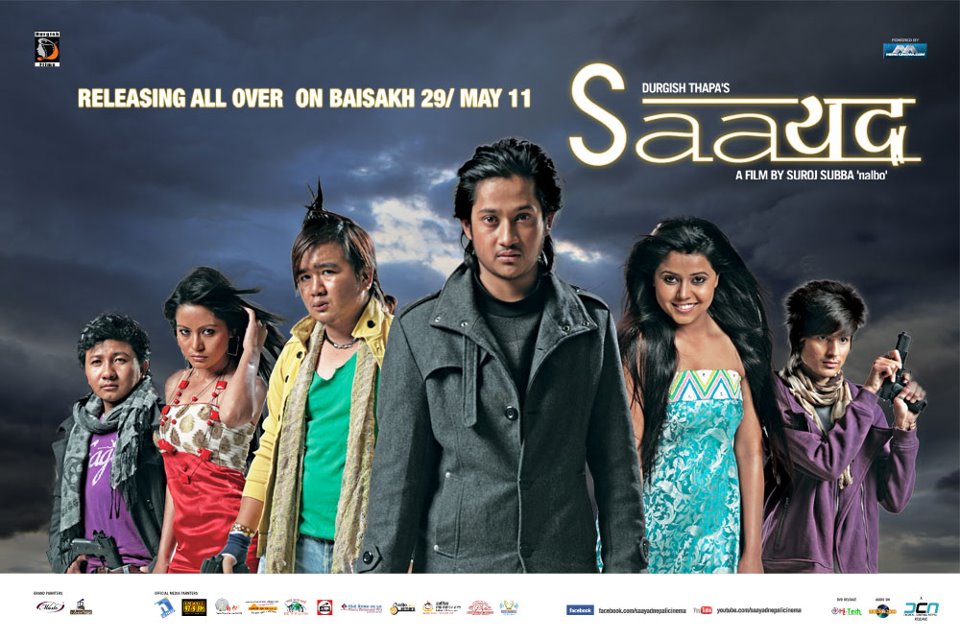 Saayad – Nepali movie has already been released in theatres of Nepal and USA. Go grab a comfy seat for yourself in the houseful rows of theatres near you. Apart from those areas, in the movie’s worldwide release context, next line-up is the UK where it is expected to go on through some half a dozen shows all over the country including London and Aldershot. The banner below should come in handy for you to find out the dates and location.

Sayaad – Nepali Movie, written and directed by Suroj Subba “nalbo” is a movie focusing on contemporary youngster trends, especially to those of +2 college students in Nepal. The Movie portrays college students revolving around the theme of growing negativities such as drug addictions, gang fights followed by Murder, loot, abduction and other things what the urban generations are growing up to.

Here’s an exclusive synopsis of the movie for you.

The movie comparatively characterizes the old and the earlier generations on the base of their interests and natures. Nirag, Sambridi, Biju and Deepen are those characters who have already completed their study and are in the process of making their career. The film also encapsulates good many characters who seem to have no keen interest in the college study. Especially they belong to the earlier generation. This generation undergoes a series of gang fight and hostility brought about by the sense of enmity. They are inflicted by drug addiction and to bunk class, to go cinema, disco are the events ordinary to them. Nihal, the younger brother of Nirag is affiliated with this group. However, there are good characters in this generation too like Cheko and Shirish. They are studious and in love with each others. The film also dramatizes the issue of sex scandal that is so pervasive in the present among city dwellers in general and college students in particular. Cheko and Shirish unknowingly fall in the same trap after their sex video is deceptively rumoured by the friends and is uploaded in You Tube. Finding no way out, they finally kill themselves. Death thus becomes the only solution for them. The story moves to the climatic end when Nihal and his group become aggressive violating human lives. Murder, loot, and abduction appear to be the base of their living. Finally Nihal, in confusion, comes to shot at his own brother, Nirag and this event desperately draws Nihal to absolute madness.

Here are some recommendations videos suggesting you to watch the movie. Seen in the first video is Super Star Rajesh Hamal and second video is GaunMaya Gurung – Miss Nepal UK 2011.

If the videos above don’t convince you to go for it, here’s a must watch parody that could influence you to get into theatres for Saayad in the UK.

I still remember Biratako Chino (probably the first Nepali Movie) when it was screened in London commercially. The movie anyway didn’t create any houseful attentions here and merely helped in overall business part. Dashdhunga – second Nepali Movie that was screened here in London was brought here by Apil Bista (Producer of the Movie) and was around the same lines of creating awareness only. Loot – recent Nepali Movie, however, took the scenario of Nepali Movies here by storm. The movie had houseful shows, repeat shows in multiple locations all over the UK and thus was commercially successful. This has acted as an inspiration for followers to bring Nepali Movies her in the UK for business.

My view is that if the movie has created a first-class hype and is really good and successful back in Nepal, and then only it can create magic in Nepali societies of the UK. Else, they will act more like a gathering of fellow friends FOR something they would love to associate with Nepal – NOT with a genuine interest in watching the flick.

I believe Saayad is a good movie with original and inspiring story determined to succeed in Nepali Market. Initial audience reaction also suggests us the movie is going to be yet another hit in Nepali Cinema. I would, therefore, recommend all cinephiles in the UK to go and watch Saayad! It may not be your story but it’s a story to watch for sure!!