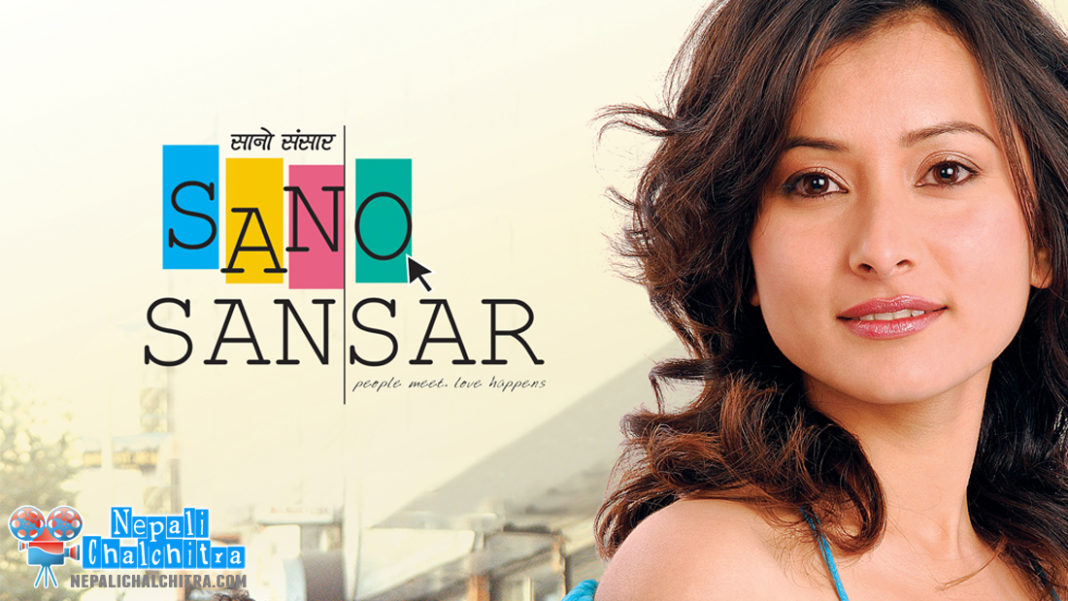 The Nepali movie industry is now buzzing with the release of Sano Sansar, the second digital Nepali movie released in Nepali cinemas.

I have talked more about Nepali movies in my today’s (23rd September) article of THE KATHMANDU POST. You can read my article entitled “INSIDE SANSAR” published in today’s Kathmandu post.

Nepali movies are indubitably on their way to progress. Recent digital movies have proved that even Nepali movies can attract more viewers if the quality is improved and publicity is enhanced. However, there are lots of hurdles in making them successful. Most importantly, they lack originality. The content is often inspired or say copied from some popular English, Hindi or Korean movies. For instance, the latest movie, Sano Sansar, is inspired from the Korean movie My sassy girl.

Similarly, film-makers take Nepali movies as a risky job to generate profit and so they do not tend to spend a huge sum on their movies. There are very few movies that do well commercially. Producers claim that even much hyped Kagbeni did not do well commercially. Producing better quality movies and better publicity require huge money but Nepali producers are generally not accustomed to spending greater amount. Nevertheless, if Nepali movie market improves, producers could invest more money in upgrading the quality of their movies.

Moreover, Nepali film industry is occupied by the same old faces and so people often argue that there is nothing new in their movies. New faces should be introduced to attract more viewers. Movie actors and producers also need to be encouraged for producing better movies. Nepali movies, if targeted to every age group of viewers, can succeed in attracting more viewers. The content and quality should mainly be enriched to influence the viewers. In addition, popular Nepali

The content and quality should mainly be enriched to influence the viewers. In addition, popular Nepali theatres should support and give preference to Nepali movies.

Obviously, there is a long way to go but we can really be optimistic about Nepali movies. The trend of producing better movies has started. Let’s hope Nepali movies attract and influence more viewers and gain a good status. After all, which country could be the best market for Nepali movies other than Nepal?

Source: THE KATHMANDU POST
Link: http://www.kantipuronline.com/kolnews.php?&nid=161563 (The online archive is no longer active – please refer to the print version of the date.)