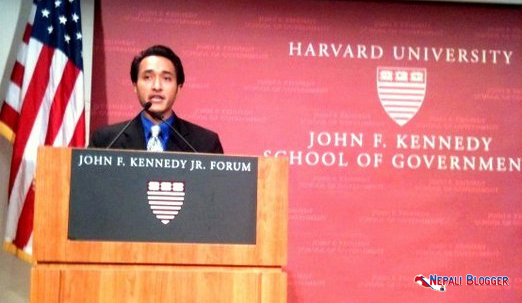 While Havard is a dream to most of Nepalis in pursuing their studies, some are actually living it and making most out of the dream. Pukar Malla, Masters in Public Administration candidate at the Harvard Kennedy School of Government has been recently elected as the President of the Harvard Graduate Council for the academic year 2010/11. He has made every Nepali student proud being a first Nepali national to be elected to such esteemed position at Harvard.

The graduate council is a representative student government of the twelve graduate and professional schools at Harvard and serves the interests of the 13,600 graduate students at Harvard. The council advocates student issues to the central administration along with fostering cross-university collaboration and nurturing social ambience among the graduate students.

Who is Pukar Malla?

Here’s his short introduction of Pukar Malla from the Havard Graduate Council website.

Pukar Malla is pursuing a Masters in Public Administration at the Kennedy School of Government. He hails from Kathmandu, Nepal. He graduated from Swarthmore College in 2002 with an Honors Major in Engineering and an Honors Minor in Economics. He received the Dean’s Award at Swarthmore, where he also played ‘Romeo’ in “Romeo and Juliet.” He spent 3 years at Cornell, where he attained MS/PhD in Electrical Engineering with a Minor in Business Management in 2007.
Pukar has worked for 6.5 years in high-tech companies such as Silicon Graphics, AMD, Intel, and a Silicon Valley startup. Most recently, he worked with IBM and Government of Nepal on innovation policies. He is co-leading a global Nepali youth movement, Nepal Ko Yuwa, with many organizations and individuals spread globally. He is also the Vice-President of the Computer Association of Nepal-USA, a technology non-profit, working towards a technological progress of Nepal. In his prior term, he served as the VP of Communications of HGC. At the Kennedy School, Pukar is investigating opportunities for technology, education and innovation to foster sustainable growth of developing nations. In his leisure, he enjoys theatre, fashion and poetry.

With students like Purkar Malla, Nepali Students are definitely making a mark in the world.

Update: Here’s one more video of Pukar Malla speaking about the inspiration and insights gained at the Harvard Kennedy School student after few years.

Nepali is going to have a bright future for sure with students like Pukar. We at NepaliBlogger want to congratulate him on his accomplishment!