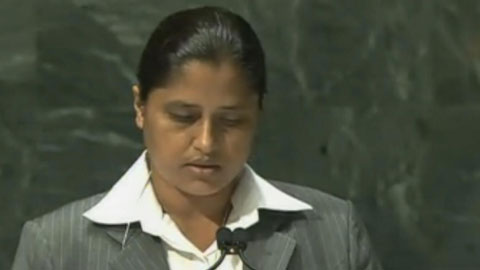 This is who are leading us?? Poor us! This is how we are represented in the world. Watch the Statement by Mrs. Dharmashila Chapagai, State Minister for Health and Population of Nepal, at the 2011 High Level Meeting on AIDS (New York, 8-10 June 2011).

She delivered this speech at High-level meeting on the comprehensive review of the progress achieved in realizing the Declaration of Commitment on HIV/AIDS and the Political Declaration on HIV/AIDS. This High Level Meeting on AIDS at United Nations in New York was attended by more then three thousand people from all over the world.

BTW who is this Dharmashila Chapagai then? Here’s the interesting story about her.

Dharmashila Chapagain, a member of the Unified Communist Party of Nepal-Maoist (UCPN-Maoist) was elected in the CA in the first past the post system after defeating the NC’s candidate Chakra Prasad Bastola from Jhapa district constituency number 4. Her childhood was a struggle with her father marrying another woman after her mother could not give birth to a son. The daily arguments and tension in the house brought a feeling of rebellion in her.

After Dharmashila got no support from her family to go to school despite her keen interest, she toiled hard on the small piece of land given to her by her father, and saved for books, notebooks and her school fees. She cannot forget working in the fields at night and appearing for School Leaving certificate (SLC) exams in the morning. Despite the lack of support from her family, she was successful in completing her intermediate education. Bold and fearless, Dharmashila is the middle daughter of four sisters. She does not like women being treated any less than men in any aspect. To prove that women are as strong as men in all ways, she also learnt Judo and went on to become a national judo player.

Speechless! What do you say??