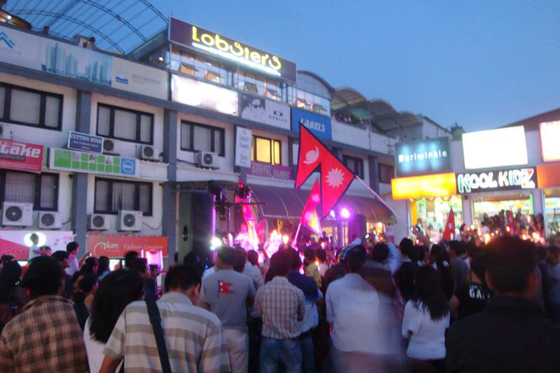 The program organized by Nepal Unites was scheduled to begin at 7pm. People started to trickle in around 6:30, and by 7pm the entire open space on both floors of the Sherpa Mall was packed with supporters eager to listen to Avaya & the Steam Injuns. Some came with Nepali flags, some had flag stickers on their cheeks, some wore t-shirts with flags on them, and some simply showed up with patriotic feeling in their hearts. To these young and active youth the event was much more than a release of a single by an up-and-coming band—this was their way of showing support to end the political stalemate and complete the constitution, this was their way of saying enough to the corrupt culture of the past and start a new beginning, but most importantly, this was their way of saying “WE ARE HERE AND WE WANT CHANGE!”

When the program started, the band entertained the crowd with a couple of their popular numbers before moving on to the formal release of their new patriotic song. The crowd, with candles in hand, rocked with this inspiring song. Let’s hope the crowd got enough inspiration to get motivated and make a difference.