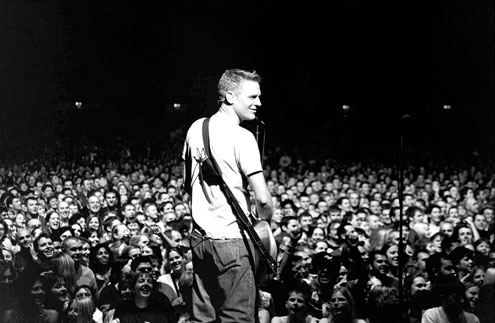 We have already confirmed Bryan Adams live performance in Nepal on 19th of February but lot of us should be waiting for the event details if not really hasty to go for the expensive tickets.

JPR Events, the organizers behind the biggest concert going to happen in Nepal organized a press met at Soaltee Crowne Plaza on January 12, 2011, to brief about the concert. Adams and his band members are flying to Kathmandu on February 19 and will perform at Kathmandu’s Dashrath Stadium(Popularly known as Dashrath Rangashala).

Be prepared to experience live with Bryan Adams in a first class concert in Nepal. Dashrath Rangasala, the National stadium of the country will be the venue for Bryan Adams live, the organizers revealed. The organizers will only be allowing 10k audience although it could accommodate up to 19k for reasons of security and proper management.

The event organizers (JPR Events in partnership with ODC Network) assured that they have experience managing huge crowd and this shouldn’t be much problem for them. They also talked about some figures of Security personnel being deployed and maintain the security level high.

The stage for the performance at the stadium will have state of the art lightening system with laser beams and fireworks. To maintain the quality of the event and make it a first class one, sound systems and stage set up for the event will be imported from India along with four 20X20 LED screens so that even the audience at back can have a good visual experience.

Ok so if you have been satisfied with everything being said, its time you go for tickets now. Tickets are priced from 2000NRS to 6000 NRS depending on the zones you opt for. The seating has been arranged in three zones, platinum, gold and silver, with price set at Rs 6,000, Rs 3,000 and Rs 2,000 respectively. Yeah I can hear you say that “Expensive Tickets” but there wouldn’t have been a better way to shape the type of crowd that attends the event.

And you have to visit the branches of Manakamana Development Bank from tomorrow (January 15, 2011) for the Tickets. All you need to do now is Grab a ticket and mark the 19th on your calendar. Click on the Image on your left to view the full poster of the event. The Gates of Dashrath Rangashala will open afterwards 2pm on 7th of Falgun (19th February)