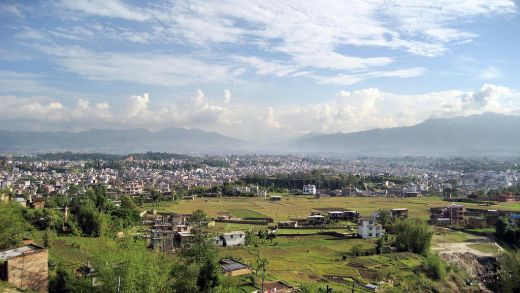 Since the beginning of the millennium years, mortal mankind is introduced to the global challenge as climate change across the world. The earth is witnessing rise in temperature, unseasoned flooding, melting of ice caps and breakout of forest fire like never before. This phenomenon of climate change has become an alarming threat and inaccessible solution to the human race. From mountains to coastal areas and from rural to urban settlements climate change has made impact on the larger territory of our earth. Kathmandu valley is also eventually not beyond the ill impact.

Valley residents have observed the inhospitable change in climate. Snowfall after 60 years in the year 2007 A.D. has been one of the strong evidences. During summer the temperature rises as sudden appearance of some uninvited guest, concurrently, winter comes without any degree of human tolerance. The temperature trend changes from season to season and the latest weather culture is observed as the dreadful device to the present living mechanism. In valley, fogs also don’t last longer compare to the other regions. More importantly, there is, as the observation and study shows, 0.06-0.08 degree rise in temperature every year. A part from this the valley has also dramatically become the victim of the thunderstorms. Abundance of deadly mosquito species causing dangerous diseases like Japanese encephalitis and Dengue and their activeness that climate change has already stepped inside the valley.

The major factors responsible for the climate change are, first, the voluminous population size and their unsound rehabilitation policy through human inhabitation beyond and inside the ring road. Second, the unawareness of the local people and government bodies. Third, the ineffectiveness and inadequate law designed by the ministry of environment and fourth the nature of government officials who turn deaf ears towards the environment related before the situation is too worst.

Modern practices on falling down the trees for the extension of urban settlement under the inspection of government and private sectors such as the contractors is frequent everywhere. The green zone and purity and simplicity of the rustic life is destroyed at the price of advancement of society but such an action plan has no foresight for the typical civil community composite of the forces of natural living. A thick volume of carbon monoxide released by the daily running vehicles and their increasing number resistively
because of individual use of vehicles under the ownership has also added plight to the climate.

Finding solution to the current challenge to some extent can be possible through the approach of people- minstrel body service on the safe guard to environment maintenance and climate control panel with the assistance of climate expert across the country or overseas. Another possible measure can be the national declaration of the House and the Head that the size of population in the valley for the community based should be cut by 0-5% per year to some other measure town of the nation. although it is a hard-line measure but if done effectively, it will certainly help us to be in safer side. further, discouraging the burning-tire trend and establishing carbon absorption plants in industrial area would also assist in the Herculean task of climate control.

Today the common need of the individual’s scholars, refined people, noble leaders and the honorable ministers should be unbiased and unselfish for the high vision to the first security of climate that only guarantees the human existence for the reason that man with constant fear and burden cannot lead to peace and progress. Therefore, one of us individually and essentially sacrifices our self-centeredness. If climate is healthy and disciplined we are in much safer zone.

By Sabin Gnawali
Author is an A-level graduate from Kathmandu, Nepal. He loves writing and has won amy awards in different competitions; the most recent one is the winner of Cambridge University’s essay writing competition on the ocassion of its 150th anniversary.