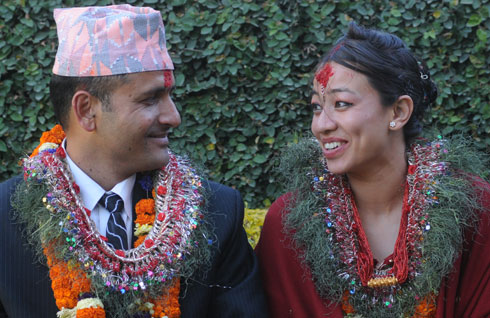 We may be proud with the centuries we live in and the advancements we have been through but our acts (or blame that on society) are still primitive, old fashioned and rather conservative. One much talked about problem our society is deeply rooted with is the classification of people in terms of their caste. But unlike many those who can’t dare to change this, here come our very own popular athletes to take the step and set an example. Taekundo Player Deepak Bista got hitched to another taekwondo star Ayasha Shakya setting an example of Inter-caste marriage. The private ceremony took place on Sunday at Budhanilkantha temple in the presence of close friends and some relatives.

This inter-caste marriage of high profile athletes was totally against families of both the players. But Deepak Bista believes they are both from Nepali Cast and that shouldn’t make any issue. “We are capable of making decisions for ourselves and we will prove that we made a right decision by becoming exemplary couple” Bista said speaking to republica. Bista and shakya transformed their six-year-long secret affair into married relations ignoring all the disagreements from parent’s side with respect to the inter-caste. This has not only given a meaningful direction for relationship but also set the couple to be an exemplary one (in case one talks about the inter-caste marriage stuff).

Bista who is considering retirement owing to injuries is more serious about Shakya’s career prospects. He is willing to support Shakya vigorously with her career to succeed in her aim of winning Asian Games medal and qualifying for the Olympics.

We at Nepali Blogger extend our best wishes for their married life. We wish Ayasha Shakya be the third name in being qualified for the Olympics after two Nepali athletes, Bista and Sangina Vaidya. And lots of appreciation to the couple for setting an exemplary inter-caste marriage.