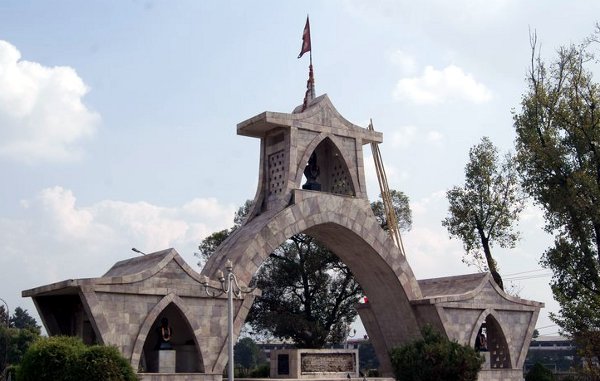 Keeping the revolutionary spirit live, the Maoists government has decided to remove the King Tribhuwan’s statue from Shahid Gate in the capital city, Kathmandu.

Sahid Gate was built in 1961 in memory of four martyrs Dasharath Chand, Gangalal Shrestha, Dharma Bhakta Mathema and Sukraraj Shastri. The monument also has the statue of King Tribhuwan on top of it. The government has argued that King Tribhuwan (Shah King) doesn’t deserve to go along with the martyrs who sacrificed lives for their nation. The statue however will be put on display at the Narayanhiti museum with due honour.

Baburam’s government definitely deserves credit for taking such revolutionary step. The statue’s removal issues had been there time and again but government in past had failed to do so. Shahid Gate (martyr’s gate) is a memorial constructed and named so to keep the statues of martyrs only. Although King Tribhuwan and the entire shah dynasty have a great role in ending the 104-year-long Rana atrocity from the nation, they cannot be in the same line as of the four martyrs.

But is it the right timing?

The government has lot to do in terms of peace process and drafting constitution on time. While the government should be focused on building consensus among parties, taking contradictory decisions as such at this moment will just divert its main focus from high priority tasks.

The consensus among parties has already been troubled – Rastriya Prajatantra Party Nepal on Wednesday boycotted the parliament meeting in protest of the government decision of removing the statue of King Tribhuwan at Shahid Gate in the capital. They have also further warned of phase wise agitation unless the decision is withdrawn. Rastriya Prajatantra Party (RPP) has always been the pro-monarch party in the country and protesting against this decision shouldn’t be taken surprisingly.

Also seen are some pro- monarch groups protesting against the decision of the government. The local residents of Hanuman Dhoka, for instance on wednesday morning took out a rally from Basantapur to Sahid Gate to protest the decision to remove Shah’s statue. Other groups such as Tarini Makhan Yuwa Club of Basantapur are also protesting the decision.

More Strikes and more bandhas are yet to follow with the decision.

What do you think of this government’s decision?