Remember the much popular concert of Bryan Adams in Nepal some nine months ago? Here’s another popular concert from the same organizers ODC Network including their India-based partner Engage, that brings another popular band Michael Learns to Rock – or better known as MLTR Live in Nepal. This much hyped MLTR concert is slated to take place on 19 November at Tudikhel, Kathmandu.

Three band member Jascha Richter (vocalist and keyboardist), Kare Wanscher (drummer) and Mikkel Lentz (guitarist) landed in Kathmandu yesterday at 2:45 pm. They also went for a press briefing for some five minutes before they were droven to Hotel Radisson (official hotel partners), in a Nepal-assembled Mustang vehicle.

[quote]I love Nepal. We are really excited, and have been waiting for twenty years to perform in Nepal. Now, the dream has come true,[/quote] shared band front man Jascha Richter. Another band person Mikkel Lentz puts it “It’s a huge honour to be here. We have heard a lot about Nepal Toursim 2011, but are yet to see it.”

The band confirmed about their visit in Nepal nearly a month ago with a short note on their website saying “We are happy to announce that Michael Learns To Rock will do a concert in Nepal in November. Further details on date and ticket information will follow soon.” Their official website now has a video on front page with the Live in Concert of Nepal. Here’s the video of them confirming their visit to Nepal including the promo of the concert.

The band speaking to media persons yesterday revealed that they will begin their performance at the concert with the song, The Secret. They will also be singing much-loved and extremely popular MLTR numbers such as Take Me to Your Heart, Sleeping Child, It’s Gonna Make Sense, More Than a Friend.

MLTR concert will actually begin from 6pm in the evening and will last for two hours. The concert will also involve live performances from Nepali Bands and artists such as Mt 884, Sabin Rai and Sunil Bardewa. Dinesh DC, the one that hosted Bryan Adams concert will also host this one. Malvika Subba and Prasan Syangden will be accompanying for the live show. Here are some images of the band being welcomed to TIA yesterday and the press briefing that took this morning in the capital.

The organizers have assured better sound and lighting systems for this concert. “The sound system itself is going to be much better than during the Bryan Adams concert. We have made arrangements for a 200,000 watt sound system which we have bought directly from India. The security system is very tight this time as well,” says Simant Gurung, Executive Director of Engage Entertainment. “This time, we have selected Tundhikhel as the venue, as it can hold a greater number of people, and there will be better rest-room facilities. The seats themselves will be categorised into three sets—silver, gold and platinum; the entry and exit gates will be different as well.” Gurung further talks about how there will be minimal traffic congestion in the area and that there will be various stalls for food and soft drinks at the concert.

MLTR’s music is widely popular and they have a huge fan following in Asia. It’s expected to be a huge success in Nepal and the organizers are expecting around 35 to 40 thousand people for the concert. 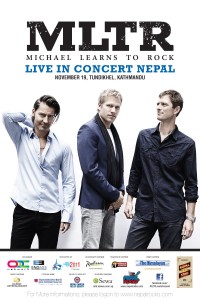 Another good thing to learn about the ODC Network is that it has also started a new project entitled, “NepalRocks” that hopes to bring two western artists to Nepal, every year. This will be the first edition of the music festival and the Network intends to get Shakira and Aerosmith to play in Kathmandu next year.

I can rely on ODC words having made Bryan Adams and MTLR already possible in Nepal! Wish all the best for success of MLTR concert in Nepal. Are you attending the concert? What do you have to say??

News and MLTR quotes via Republica and Ekantipur, Images Via MLTR facebook Page