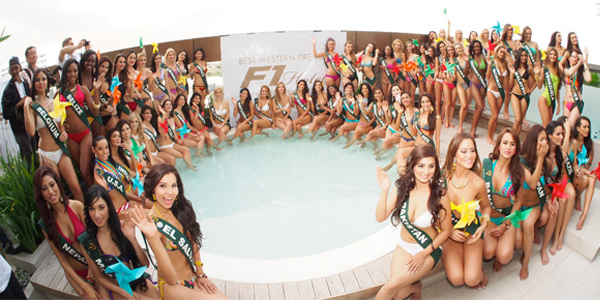 Miss Nepal Earth 2012 – Nagma Shrestha is representing Nepal in Miss Earth international pageant of 2012. The beauty pageant that is being held at Philippines this year will undergo its coronation on 24th November to entitle one participant Miss Earth 2012.

Nagma Shrestha was crowned the title of Miss Nepal Earth 2012 in a national beauty pageant held in Nepal thus enabling her to represent Nepal in the international pageant. With her participation, Shrestha hopes her performance to be a spark of ‘Hope’ to millions who have nothing to be hopeful for. Here’s her video for Eco-beauty project of Miss Earth.

In her journey to Miss Earth, Nagma Shrestha looks prepared and determined to succeed. Pre-pageant activities have started since 4th November and so far Nagma Shrestha has received silver Medal in Mural Painting and Walk with me: Luneta Park “People’s Choice Award” from her group 2. She also won best in formal wear round for Nepal yesterday. Here’s gallery of images of Nagma Shrestha’s journey in Miss Earth 2012.

The coronation of the event will be held on November 24 at 8:00PM at Versailles Palace in Alabang, Matinlupa City. The pageant will be live telecasted on Starworld and shown on November 25, 10:00AM on ABS CBN, The Filipino Channel and also on channels of participating counties worldwide.

Other title winners of Miss Nepal 2012 Shristi Shrestha and Subekshya Khadka have already participated in Miss World 2012 and Miss International 2012 respectively. Although both of them made their presence strong at those events, they couldn’t bring back any titles to their name.

We wish all the best to Nagma Shrestha and hope she shines with some title in the pageant.