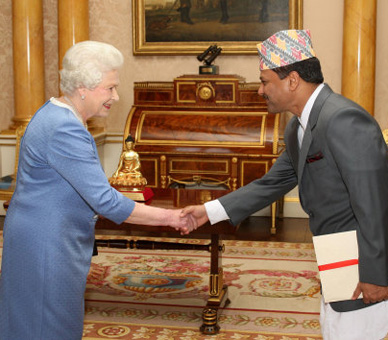 Dr Chalise has been nominated for defending Gurkha rights in the UK. Since becoming the Nepalese Ambassador to the UK in 2009, Dr Chalise has helped to raise the profile of Gurkha rights in the UK. Previous British law had stated that Gurkhas who had retired before 1997 were not permitted to settle in the UK. After a high profile campaign in 2009 this law was changed whereby Gurkhas who retired before 1997 and who had completed more than four years of service were granted settlement in the UK. Dr Chalise helped to raise the issue of Gurkha rights with various non-governmental organisations and through this co-operation, he has ensured that Gurkha communities are able to integrate into society by supporting training programmes to improve language skills and gaining access to key business and political contacts.

Integration, the Ambassadors notes, is one of the most difficult transitions for the Gurkha community and self-sustainability is vitally important to ensure that new members of the community are active citizens. The Ambassador has a deep understanding of this and has enabled Gurkhas to set up businesses and market themselves to the wider community. Through the Ambassador’s intervention, a Gurkha-owned restaurant named Rara in Kew gained strong connections at the Asian Mela which brings approximately 80,000 people.

Dr Chalise states that “Nepalese entrepreneurs are particularly doing well in catering and hospitality industries here … I find local market is investment friendly for our Nepali entrepreneurs”. The Ambassador also encourages investment and business prospects in Nepal. Recently the Nepalese embassy held a trade delegation with Small and Medium Enterprises in order to encourage trade with Nepal. He has promoted trade in Nepal by encouraging British funding to support tourism and reconstruction in Nepal and encouraged tourism to Nepal by holding five Tourism Promotion Programmes for Nepal across the UK in 2011. Through his advocacy for issues affecting Gurkhas here in the UK, and abroad in Nepal, Dr Chalise has proven himself to be a true Grassroot Diplomat, and for this his efforts will be recognised at the Initiative Awards.

Over 50 high-level government officials have been nominated for the Grassroot Diplomat Initiative Awards. Join Dr Suresh Chandra Chalise and other government nominees at the Vincent Rooms, Westminster with an evening performance led by Euro-Vision Contest artist, Imaani. For ticket information, please visit: www.grassrootdiplomat.org/awards.

Disclaimer: This is NOT any kind of sponsored post. The link is just to credit back the author’s effort for this post. – NepaliBlogger[/box]