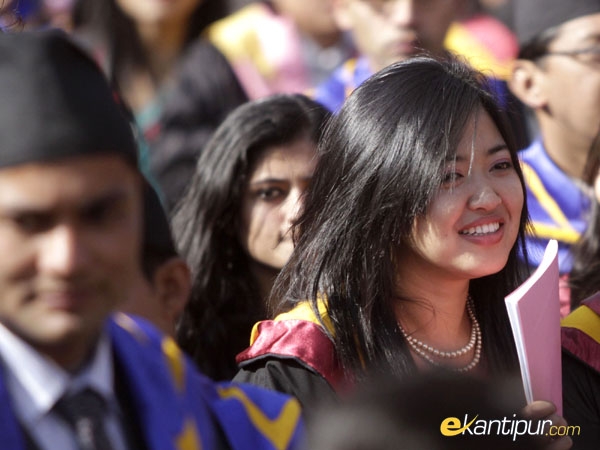 Around 6,722 graduates from various faculties and institutes of Tribhuvan University participated in the 39th convocation ceremony of TU at the university’s cricket ground in Kirtipur. Chairman of Interim Government of Nepal, Khil Raj Regmi, in his capacity as the Chancellor of TU, distributed honours to the attending students. Along with Regmi, education minister Madhav Prasad Poudel and Vice-Chancellor of TU, Prof. Hira Bahadur Maharjan were also present at the ceremony.

A total of 51 students together with 34 from humanities, seven each from science and technology and management, two from education and one from law faculty received doctorate degree in the ceremony.

Tribhuvan University is the oldest university of Nepal with five institutes, 60 constituent campuses and more than 900 affiliated campuses nationwide. This year, out of 54,775 graduates from the university, only 6,722 students attended the convocation ceremony. Prof. Maharjan said that the university is constantly striving for making the education system more productive, and gaining international excellence. Prof.

He Jianpng, Vice-President of University of Xihua was also invited to the ceremony. He said that TU should emphasize on producing skilled human resource that would contribute to socio-economic development of the country.

In an addressing speech at 39th Convocation Ceremony of TU, Regmi said that education is vital spark for social transformation and building nation a success. He added that TU has been contributing long in producing skilled human resource for the nation. He also expected TU to enhance world-class human resource capable of serving in various sectors of societies worldwide. Regmi, on behalf of government, further assured to sustain peaceful and stable environment for educational development in the nation.

Congratulations to all the graduates!