Nepali Movie Highway has been in headlines since its early phase of production and promotion. The trailers of the movie were successful in creating a huge series of positive discussions for the recuperating industry among Nepali Movie lovers. Not just the trailers, Highway also being the first movie to have creatively garnered funding for its post production from Kickstarter project was more impressive. Noteworthy among all of what makes Highway first of its kind Nepali Movie is that, the movie is now going to stand out for being first Nepali movie to be screened at The Berlinale Festival. 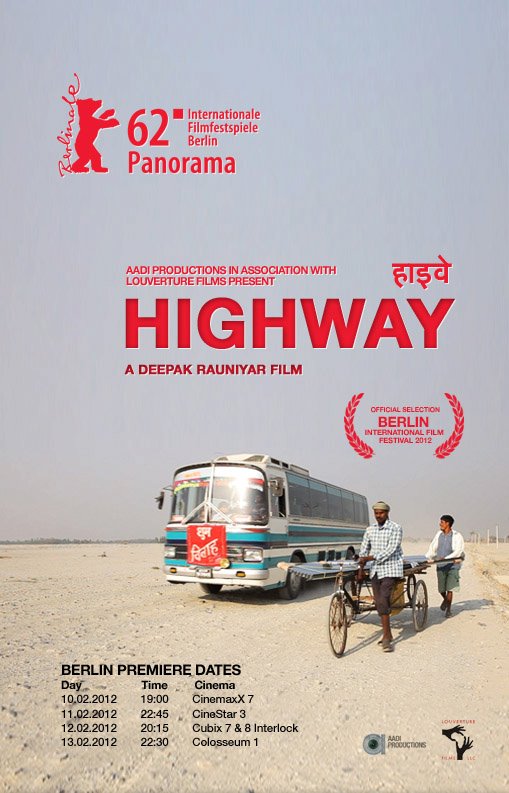 You heard that right. Highway – will be the first Nepali Movie to be screened at The Berlinale Festival alongside the best films selected across the globe. The Berlinale Festival is one of the reputed film festivals in the world. Movie “Highway” has been qualified for the Best First Feature Award along with 27 other movies. It’s listed under Panorama section notably –“HIGHWAY by Deepak Rauniyar, Nepal/USA”. Premier screening dates for the movie are listed in the banner of the movie above.

Interestingly not any of the Indian Movies (movies from Bollywood) could make it to the list of this year’s festival. Nepali Movie HIGHWAY will be the only movie representing south Asian region.

Set among the breathtaking landscapes of Eastern Nepal, “HIGHWAY”, the first full-length feature of director/ producer Deepak Rauniyar, follows the journey of nine characters whose individual stories become accidentally interconnected during an ill-fated bus journey they take to the capital Kathmandu. The passengers – each of whom urgently needs to be somewhere else – find themselves stranded on the only main road due to an improvised and unlawful blockade known as a “bandh”. While the journey is thwarted numerous times awaiting a resolution to the combustible strike, the film’s story shifts into the characters’ psychological and spiritual “bandhs” that many Nepalis are contending with since the end of the bloody 12-year civil conflict.

Highway was previously on top of the bill when it collected funding of 30k successfully from Kickstarter.com, which bills itself as the world’s largest funding platform for creative projects. While in New York City to finish post-production work with Louverture Films, Deepak Rauniyar submitted the project to Kickstarter along with the video below to generate funding of $30,000 to the final edit, sound design and online post, which includes the color correct and the sound mix. This project successfully raised its funding goal on November 9.

Literally, it should have been a dream come true for Deepak Rauniyar. First the movie being actually successful in garnering the funding from KickStarter and secondly the movie working out according to his plans. If you had read the Kickstarter page for the project carefully, you should be acquainted with Rauniyar’s plan of submitting the film to major international festivals where he hoped to premiere in a competition category. The movie being selected for The Berlinale Festival made that dream possible.

If you haven’t watched the trailer of the movie yet, here it is for you.

Congratulations to Deepak Rauniyar and his team of Highway!

I am really optimistic that the Movie will really do well in the country and abroad upon its release. With Loot being a recent successful movie bagging crores (1 crore, 67 Lakhs till date) and movies like Highway being queued to release, I can see a bright future of Nepali Movie Industry. What say?