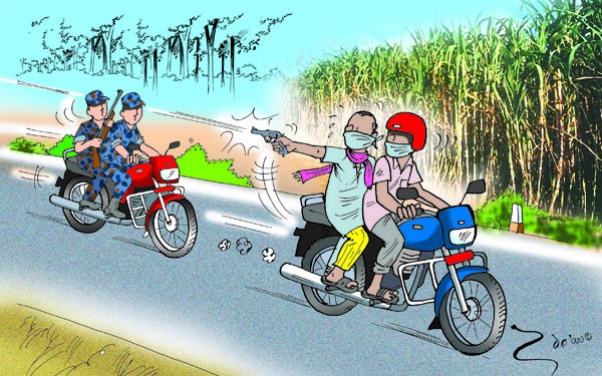 Lately, there was an attention-grabbing news in media about two cops posting at Bara that caught two notorious Indian criminals named Bipin Yadav and Ravi Pandey keeping their life at stake. Despite being shot by the criminals and in bloodshed condition while chasing them, assistant sub-inspector Matrika Thakur and constable Sheikh Abajan didn’t let the criminals run away.

The cops were awarded amidst a program organized at the Police Headquarters today. Appreciating their bravery, Inspector General of Police, Umakant Aryal, promoted them on a higher rank. Valiant policemen Thakur and Abajan have been promoted to the rank of Sub-inspector of Police and Head Constable correspondingly. 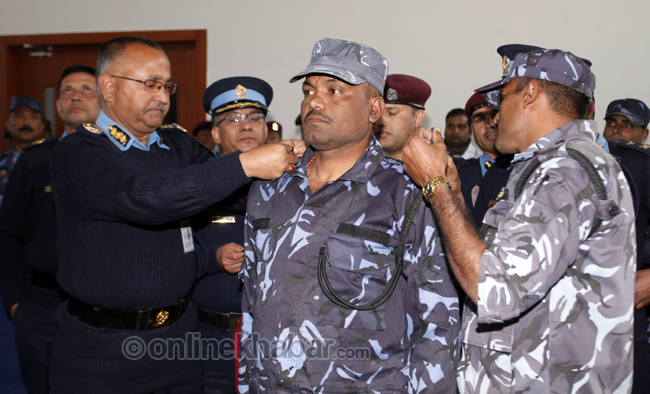 The criminals were trying to escape back India after they shot Aftab Ansari, who was an HGV entrepreneur. Ansari died during medication at National Medical College in Birgunj. Policemen Thakur and Abajan, equipped only with a rifle and a pistol, chased the criminals up to eight kilometers, where they arrested the criminals in Shripur of Pipariya. The criminals were Bipin Yadav from Lucknow and Ravi Pandey from Jodhpur of India, who were commissioned by Ballu Shrivastav, a notorious leader of underworld.

After an investigation, police has uncovered the fact that Ansari had mingled in business of fake Indian rupee with the notorious group.

The criminals were professional shooters armed with double guns. They entered Nepal in a motorbike with Indian number plate, and were trying to escape in a looted Nepali motorbike after committing the murder. Wounded ASI Thakur heroically seized a gun from Pandey while he was shooting at the policemen. Pandey was again trying to shoot Thakur with another gun, and there came Sheikh with bleeding arm, who charged Pandey with the butt of his rifle and got him under arrest finally. Another companion Yadav, fled away into a scrubland of sugarcane nearby during the struggle. Another squad of policemen later arrested him after a search of two hours.

Police Headquarters decided to honour the courageous attempt of Thakur and Abajan by promoting them to higher rank, who, despite of severe injury, put their life at risk and heroically arrested the villains. Speaker of Nepal Police Force, SSP Ganesh KC said that this very task will help to reinforce the mental spirit of the entire police force.

The bravery of Thakur and Abajan has proved the adroit capability and performance of Nepal Police even with the traditional and limited security resources.