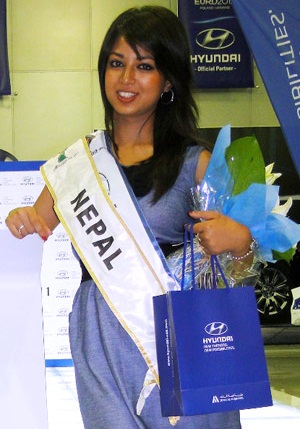 Miss India Worldwide is an international beauty pageant held annually for the title of most beautiful (and talented) woman in the Indian Diaspora. This was the 20th Miss India Worldwide pageant which invited almost 30 countries around the world. Ankita Cheryl, Miss India Australia grabbed the title of the event while Miss India USA and Miss India Trinidad finished first and second runner-up, respectively. Popular names from Bollywood including former Miss Universe, Sushmita Sen were present at the event.

“It was an amazing experience and I’m thankful to the organizers for giving me this opportunity. It was hectic, but it was a growing process.” Said Romi, after being awarded with the title of “Miss Beautiful Skin”. The organizers of the event Nepalese Council Pvt Ltd, had selected this 18-year-old native of Birgunj to represent Nepal from their last year’s India Worldwide Nepal pageant, yet another beauty pageant of Nepal.

“Admitted, we were rushed and there wasn’t sufficient time for grooming but Romi was sublime. I had full faith in her and she sure did bedazzle the crowd.” commented Deependra Ratna Shakya, Executive Director of Nepalese Council Pvt Ltd to praise Romi Shah for the title. With Regard to Romi Shah’s selection this year without any pageant, Mr Shakya was quoted saying “Due to time constraint we couldn’t organize the event this year. So we short listed candidates from last year’s top finalist and after a rigorous selection process, Romi was our eventual choice.”

Romi Shah, 18-year-old from Birgunj aspires to be a Pilot Someday. Congrats to her for the title and good luck with her aim!