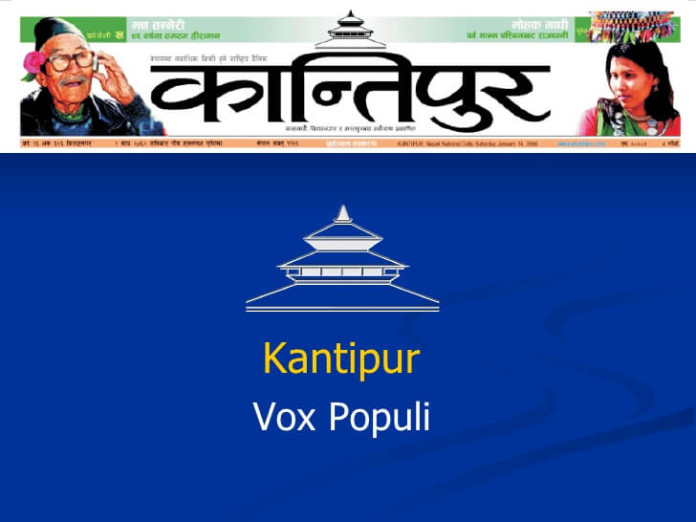 Dear all,
I’m a normal Nepali, a Social activist and writer/reporter. Today I encountered news which completely made me re-think where our country’s journalism is moving. I believe Kantipur being the foremost and pioneering has more responsibility in its sustainability than others where it’s losing its hope. It used to be people’s voice and use to lead peoples aspirations in words of change but I guess moving on with commercialism, it has lost its vitality and core values. Previously Kantipur use to be known for its News validity and precision but these days Kantipur is known for its reporters and how they put up their stories. It has become a high reporter/ writers based Newspaper which certainly looks into personal writer’s opinions rather than any research or reality. This mail basically encompasses my feeling toward a journalist’s role and his practices. 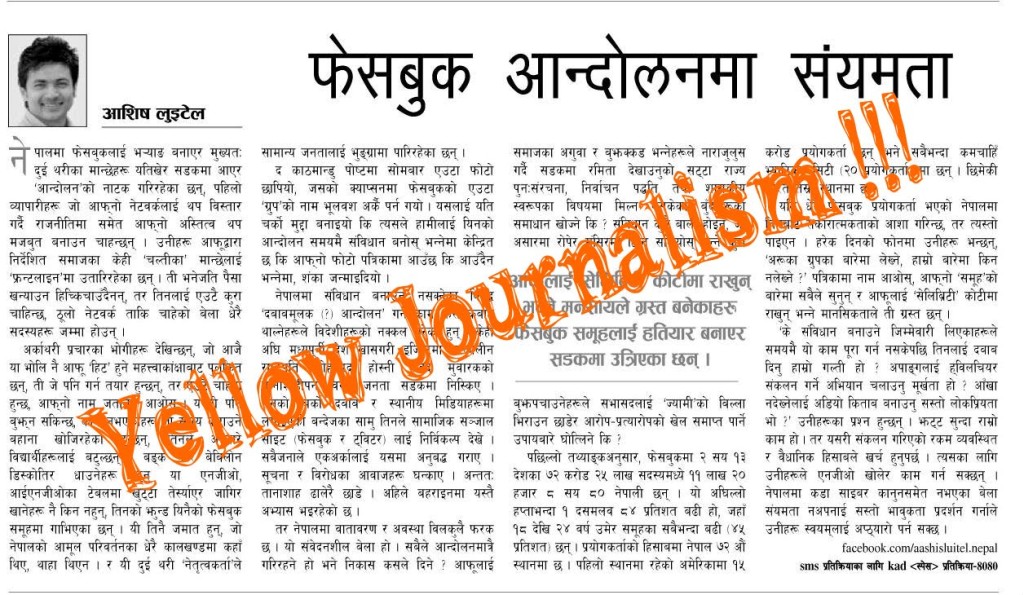 This mail is regarding Aashish Luitel’s article published in the Kantipur daily dated July 27, 2011 about Facebook activism which is attached with this mail. I believe everyone has their opinion and we should respect them at all times. PRESS FREEDOM is not a question at any times, but when it deals with social issues even writers and reporters have to be careful about the impacts and roles. A writer in view of his publication’s popularity cannot go about writing anything to hurt people sentiment without facts and information. It is his priority to understand and portray the diplomacy of the information to its use and validity. His persistence in being non bias towards the issue should be his priority. The way Mr Luitel portrays his opinion towards such an important issue seems very irrelevant and questionable. I believe questioning other integrity and giving people your own personal Facebook information (Facebook profile address) certainly points his intentions toward the larger picture of his cheap popularity stunt. If that is the case then I’m sorry to say this but people would lose credibility over the news and news making process.

I would just like to ask the editors these questions “where are we moving? Is this journalism that you guys want to pass on to the coming generation? Are moving on the right track?” Manipulation, media power play, Corruption and cheap popularity stunts are morally unacceptable. I believe with great power comes a great responsibility which is being missed by Mr. Luitel. I doubt his credibility and I challenge his scepticism of his definition in regards to journalism.

I say this is yellow journalism not press freedom to write against a social movement that too on the basis of rumours with no proofs is a question of integrity. I believe being a writer/ reporter from a prestigious publication and writing something on a social issue that too without any research based on rumours and slashing an image of a movement created and dedicated for the people is a question that points fingers his and your integrity not ours. I would just like to ask the editorial team how could they have approve such a personal opinionated piece that slashes public sentiment.

The Facebook movement has not only been an eyes opener to thousands of Nepali Facebook users but it has brought into light the true spirit of patriotism. Just think where wore we moving a year back. Young people use to say, I hate politics, politics is shit and its nonsense. From this movement at least we have got the feeling of My Country my responsibility, Young people are at least talking and showing their interest that’s credibility sir. We know we might bring not bring an instant change but we know we are satisfied at least we are changing the mentality of youth. We are very sure that It’s our country, and we made it garbage and we are trying to clean it so please do join in to know the reality.

“Kantipur Publication especially the “Kantipur” used to be one of the best news publications in Nepal but its credibility is degrading not due to competition but due to its weak editorial Team who don’t even cross verify its reporter’s stories. I guess the Writers and Reporters are more important than the quality of news & its impact.” MY COUNTRY MY RESPONSIBILITY, MY NEPAL MY PRIDE.

[box type=”info” size=”large”]The author is a blogger, freelance writer, photographer and activist. He blogs at shreedeeprayamajhi.blogspot.com and is also a reporter at Ground Report.[/box]