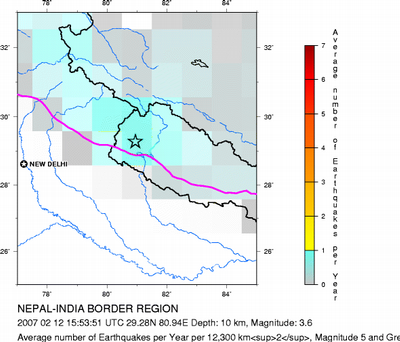 A 6.8 magnitude earthquake has been experienced in Kathmandu, Pokhara and other parts of the country. The earthquake occurred around 6.25 pm (this evening) and its reported that at least five people have been killed and several others have been injured. The epicentre of the earthquake is said to be somewhere along the Indo-Nepal border. Reported till now is of Magnitude 6.8 in SIKKIM, INDIA. Kathmandu, however experienced magnitude 6.8 on Richter Scale Earthquake.

The National Seismologic Centre (NSC) in Kathmandu said that the quake was measured 6.8 on the Richter scale with its epicentre in the border region of Taplejung of Nepal and Sikkim of India.

The earthquake lasted for few seconds and people in Kathmandu are already full of panic.

We are following tweets to report damages and injuiries.

The Earthquake also interrupted the ongoing House session of CA in Kathmandu. Seen in the image below are Lawmakers outside the CA building in Kathmandu. (Photo: Bhaswor Ojha)

We are following tweets talking about Earthquake in Nepal

Do share if you have something to say about the earthquake in comments below! Stay Safe everyone!!