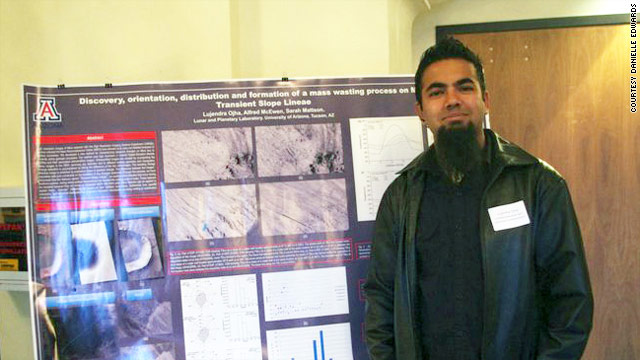 Ojha has co-authored a study in the journal Science suggesting that there is liquid water during warmer seasons on Mars. Mars discovery was an outcome of an independent project he was doing with professor Alfred McEwen, lead author of the new study published in Science.

Washington Post, that talks about the dark finger like streaks appearing on surface of mars (that suggests evidence of salty water on Mars), puts Ojha in context that as “The dark streaks were initially noticed by a student at the school in images sent back by the Mars Reconnaissance Orbiter (MRO). The pixelated images were taken as far back as 2007, but with so much data coming in from space missions, they had remained unstudied. McEwan suggested that the student — geophysics junior Lujendra Ojha — examine over time the locations with streaks, and Ojha found that the streaks changed dramatically by season.”

In a context on how an undergrad spotted possible water on Mars, CNN says “Using a computer algorithm to examine images taken in the same crater as the gullies Dundas had examined, Ojha removed visual distortions, such as shadows, from images of a crater taken at different points in time. With that technique, he compared the images to identify the changes over time. That’s how Ojha noticed irregular features in the crater that weren’t related to the gullies.”

Nepali student Lujendra Ojha is an Undergraduate Intern at Department of Planetary Sciences, Lunar and Planetary Laboratory at University of Arizona in Tucson (AZ 85721), United States. Ojha is 21 years old boy, originally from Mhepi, kathamndu Nepal. He has moved to U.S at the age of 15 and did his high school from there. He lives in Tucson, Arizona U.S.A. He is now undergraduate student at University of Arizona studying Geophysics and during his independent study he discovered possibility of liquid formation in Mars. He is Planning to graduate soon and wants to do further study in Planetary science. He can be reached via Email: luju at email.arizona.edu

Sad thing is that the news of this young achiever hasn’t profoundly made it to media in Nepal and there are Indian news agencies such as Indian express who have already claimed Lujendra Ojha as Indian-origin scientist. Lujendra Ojha has been mentioned in thousands of news channels and websites including msnbc, fox news, discovery news, Washington post, LA times, Science magazines etc… following the groundbreaking discovery. Shame on Nepali Media!!

Special request: Please promote this news as much as you can!! Let’s be proud of our young Nepali Space scientist for this awesome discovery!