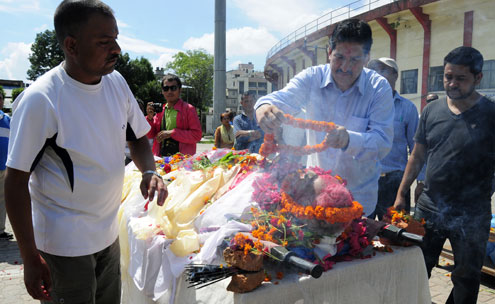 Team Nepal of London 2012 Olympics had one more attraction this year in addition to the five players that participated in the games. Well, he wasn’t involved in the games but he was main highlight for many Nepali Communities here in the UK. Joining the 2012 London Olympics was Nepal’s first Olympian – Bhupendra Silwal. Sadly, the 78-year-old athlete is no more with us just after a month of his London Olympics Visit.

Bhupendra Silwal was the member of first ever Team Nepal participating in 1964 Olympics held in Tokyo. A patient for diabetes, blood pressure and asthma for a long time; Silwal died following an operation of a tumor in his stomach at the Army hospital yesterday in Kathmandu. Symptoms of Jaundice were noticed during his London visit and after returning to Nepal, he was recently admitted in the hospital with same jaundice complaints. Later he was diagnosed with tumor in his stomach.

Honoured with Lifetime Achievement Award by the Nepal Sports Journalists Forum (NSJF), Mr Silwal visited London during Olympics with invitation of NRN-UK and support of some Nepali Journalists. For Silwal, visiting London for Olympics and watching the games after fifty years was literally like a dream come true. Nepali communities in London became a last hope for Silwal not just for making it possible to watch London games but also honouring him and collecting over four lakhs NRS for his health checkups. Though the money didn’t come into use, Silwal got a life-time memory just in time before he was meant to leave the world. In his own words – “I feel like being on top of Everest visiting London and watching the games”.

Silwal was cremated at the Pashupati Aryaghat on Friday. Nepal Olympian Association handed over Rs 10,000 to Silwal’s family to perform the rituals. May his soul rest in peace!